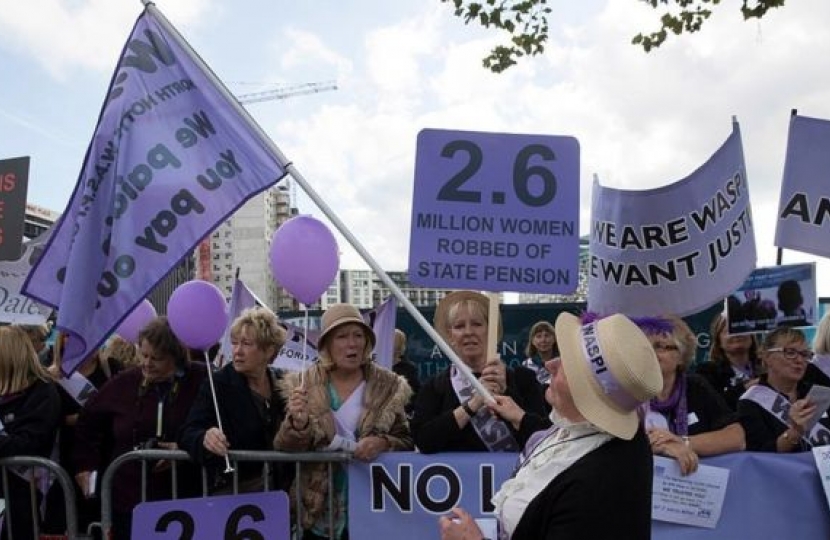 Since we first became aware of the injustice facing millions of women who were affected by the government’s changes to the state pension age in 2011, we’ve been working on a cross-party basis to ensure these women get the resolution they need and deserve. As co-chairs of the cross-party group on the issues facing 1950s-born women in Parliament, we’ve sought to build consensus between the women affected and the political parties in Parliament to find a way forward. Our commitment to this cause remains resolute. Put simply, we will not rest until we get justice for all of the women affected by these changes.

Last year, we invited all of the campaign groups seeking action on this issue to take part in a consultation to help us speak with one collective voice when asking the government to take action on this. The scope of the pension age changes means that many, many women have been affected in numerous different ways. This consultation process helped us to come up with a set of solutions which were almost unanimously accepted by all of the groups campaigning on this issue across the country. Together, we agreed to call on the Pensions Minister to conduct a far-reaching review into the pension arrangements for women born in the 1950s and to consider costing three jointly-agreed solutions.

Firstly, we’d like the government to give a no strings attached, non means tested payment to all women age 63 and over from the day it is approved until they reach their state pension age. Many of the women impacted have suffered significant financial issues as a result of having to change their retirement plans and these payments would go some way towards addressing the problems they have faced or are facing.

Secondly, we believe women’s pensions should be equalised so that everyone receives a full state pension of £159 per year, regardless of the number of years of National Insurance contributions they have accrued. Again, this was one of the key issues that many campaigners have highlighted and it’s only right that the government takes action to redress this imbalance.

Finally – and perhaps most importantly – for those women who have no other income or private pension to draw from, or those who are suffering financial hardship, our welfare system must act as the safety net it was designed to be. Extending pension credit payments to the women who fall within this specific set of circumstances would be an effective means of helping reduce any financial strain that has stemmed from the government’s changes. It’s widely known that pension credit is the most under-claimed benefit by those who are eligible to do so which means that this change would, at least in part, simply mean drawing upon money that has already been allocated to the Department for Work and Pensions.

These three key changes represent a viable means of providing the much-needed support many 1950s-born women need and resolution for the injustice they have faced. We will continue working steadfastly with MPs of all political colours – standing shoulder to shoulder with the tenacious campaigners – to secure the changes we all want to see. Whether this be through Parliamentary means, including via Private Members’ Bills, or by seeking to build a consensus with members of the government, we will continue standing up for all of the women affected.

Issues like this are rare. To varying extents, this problem has affected around 3.8 million people – from each and every single constituency across the UK.

3.8 million people makes for a powerful voice – a voice we will continue to champion until we finally get justice.