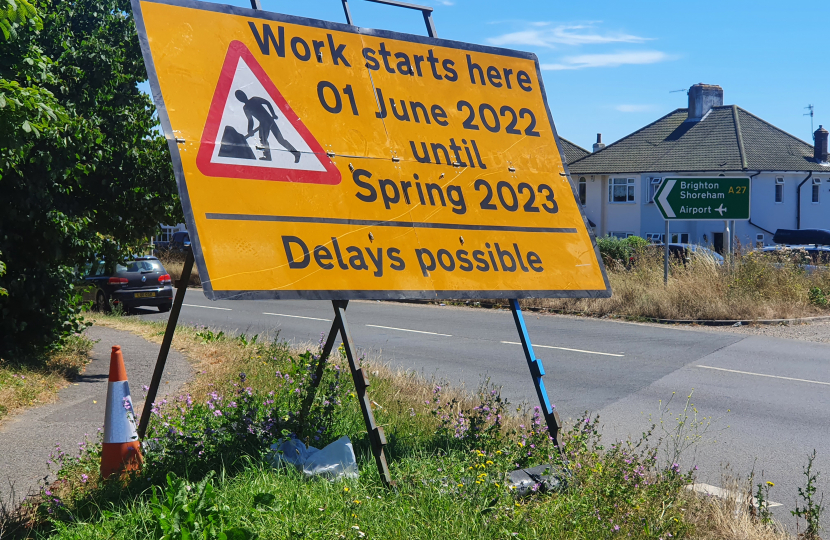 I am very aware of the closure of the A27 between Shoreham and Lancing following the serious crash which happened on Tuesday. Not surprisingly many constituents have told me about the chaos that is still being caused and the knock-on effect on the surrounding road system. This is of course no surprise give the havoc caused when the A27 was closed following the Air Show tragedy and due to previous flooding instances.

I am very disappointed with the poor communications from National Highways who are responsible for the A27 and I have had to chase them myself to get more information about exactly what is going on and what has caused the closure. I have complained about this to National Highways and will receive a further update after a site meeting planned for later today and will continue to post further information on my social media platforms as I receive it. I am also due to be in Lancing on Friday and will visit the A27 and see the problem at first hand.

Because of the poor communication there has been a lot of speculation going round social media as usual and so I wanted to publish everything I know so that people do not get the wrong end of the stick. I am no expert on road gritting, but this is the official explanation I have been given so do not shoot the messenger!

I am told that in light of the falling temperatures that stretch of the A27 was gritted as normal on Tuesday. In order to ‘activate’ the grit it relies on traffic driving over the material to crush it into the road. The accident happened soon after the road was gritted leading to the closure of the road meaning no traffic drove through for several hours. During that time the runoff of water from the Downs and continued rain effectively washed the grit off the road surface so that it was not protected. Subsequently the temperature dropped below freezing and the large amounts of water that accumulated turned to ice and became dangerous for traffic. As a result, National Highways closed the road before further accidents took place.

Because of the continuing below zero temperatures, which are even colder on the road surface, the road crew have not been able to remove the ice and it is being compacted by additional water freezing. It is not clear whether this will be achievable by later today (Thursday) but they are trying their best. Some people have speculated that the excess water has been caused by the work going on around the New Monk’s Farm site and/or that there has also been a burst water main. Apparently neither scenario is true and Southern Water have not reported any burst pipes.

For those who remember previous floods more than 10 years ago over one Christmas this was caused by a prolonged period of heavy rain which raises the water tables and subsequently natural springs come to life along the route of the A27 especially around the bank north of Withy Patch and the Sussex Pad. As a result of this a lot of work was done on renewing drainage along parts of this road but the sheer weight of water appears to have overwhelmed it so that surface water is freezing before it drains away. I have asked for further information on this and in particular whether the drains have been properly maintained and the problem is not exacerbated by them being clogged up with debris.

Again I will post further information when I have it and hopefully we can get the road open properly as soon as possible. National Highways are in no doubt now about the local chaos that is being caused because of this and my anger about the way it has been handled.