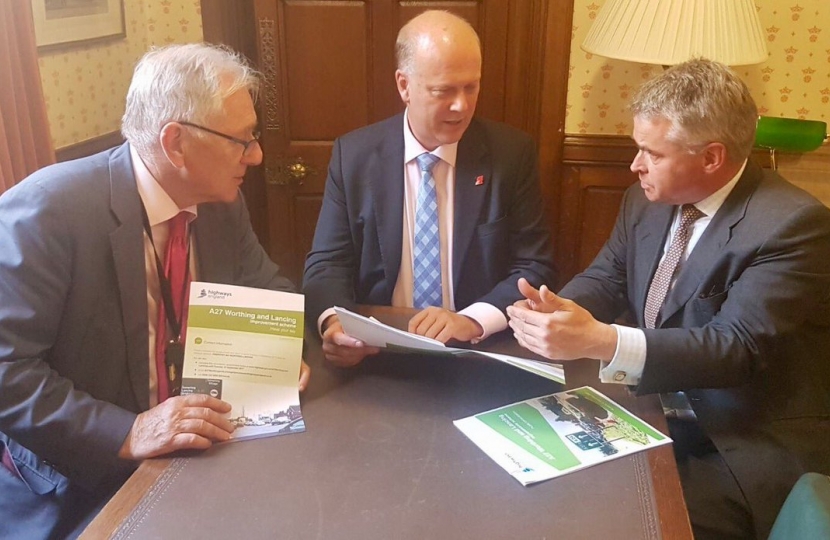 Worthing’s MPs Tim Loughton and Sir Peter Bottomley have welcomed a positive response from Transport Secretary Chris Grayling about future options for the A27. This follows a meeting they held with the Secretary of State straight after Highways England announced its limited single option proposal constrained by the indicative budget allocated to the project. Subsequently the proposal met with universal rejection and the A27 Working Group, set up by the MPs, wrote formally to reject what was on offer.

The MPs have consistently argued for options that involve grade separation at the major junctions if the online option is the only way ahead after a full blown bypass was earlier rejected as unworkable and unaffordable. This would involve underpasses or bridges at key pinch points widely seen as the major obstacle to proper traffic flow. Earlier this month they met the lead officials from Highways England working on the project to discuss ongoing work on options once the consultation responses have been processed. An announcement is expected by January.

The letter from Chris Grayling confirms that the single option from Highways England has very little support and therefore he has asked for a review of ‘viable alternative options…including a grade separation option…to give a full perspective of the alternatives in terms of funding and environmental factors.’

“This is very good news and we are delighted that Chris Grayling has listened to the very real concerns we preened from our constituents who have universally rejected the inadequate and underfunded single option.

"It is essential that Highways England is now permitted to look at the grade separation options which are referred to in the consultation document and new effective solutions can be put forward to local people next year. This is the only way that we stand any chance of achieving significant improvements to traffic flow on our stretch of the A27.

"We will continue to work hard to achieve the additional funding required. That will certainly not be anything less than the amounts that have been earmarked for the Arundel section, which is still on track. This may delay the work a little but it will be worth it rather than compromise on a costly white elephant which only offered ‘tinkering at the edges.”

A full version of Chris Grayling’s letter is attached.

The objective of the A27 Working Group is to demonstrate to the Government the overwhelming economic, environmental and social case for improving the A27 across West Sussex.