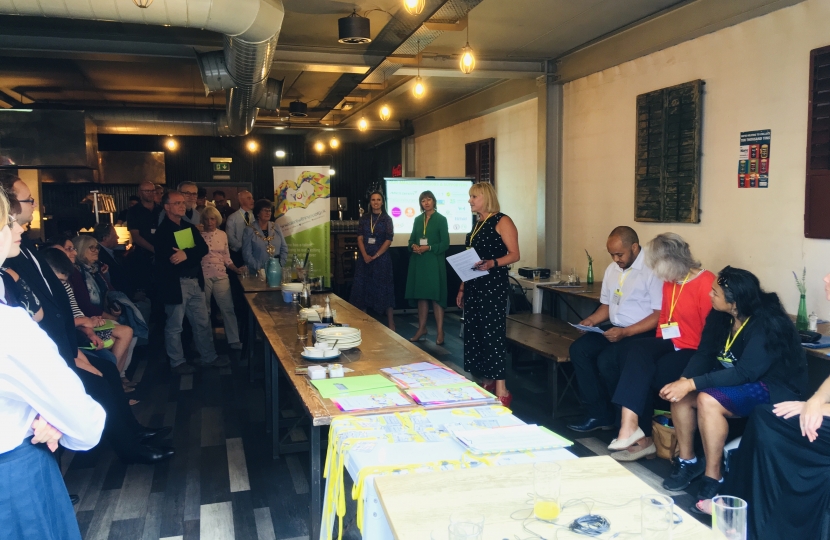 Last Wednesday I joined 248 noisy young people at Worthing Assembly Hall to celebrate one of the Government’s best kept secrets – the National Citizen Service. The largest youth project in Europe has been running since 2011 and I was asked by David Cameron to help design the scheme aimed at engaging 16-year olds in their local communities and unleashing their talents.

Around 700,000 young people have taken part with high satisfaction rates and extensive research showing enhanced prospects for alumni whilst over 12 and a half million hours of community action have been completed. Yet it always amazes me how many people still haven’t heard of it. Hence, I urged all those graduates of the 2019 cohort last week to be champions for NCS and spread the word to friends and family to take part next year.

Earlier in the summer I sat on the panel for one of their ‘Dragon’s Den’ sessions at Lancing Parish Hall where they pitch social action projects to us for scrutiny and there were some very impressive proposals involving homeless charities, veterans, the environment and the LGBT Switchboard amongst others. Locally the scheme is run by the excellent charity Concordia so do make sure you son/daughter, grandson/granddaughter is up for it when they start recruiting next spring.

Another great youth project has been former councillor Vicky Vaughan’s Talent Within You. Over the last 6 months Vicky has given 32 local teenagers the opportunity to engage with some inspirational figures such as rugby player Rob Andrew and wheelchair tennis player Lauren Jones and involved them in some great social action projects such as the new mural round the beach volleyball courts. They have also had apprenticeship experience with sponsors such as car makers Mclaren as part of 406 hours of activities. So it was a pleasure to see them graduate with great pride at a reception hosted by Andy Sparsis at his Fat Greek Restaurant in Worthing.

There was a bit of a youth theme about last week as I also attended an excellent debate on knife crime held by the West Sussex Youth Cabinet in the Council Chamber at County Hall with presentations from police, the Police Commissioner’s Office and the Youth Offender Service before some very thoughtful and robust contributions from the young representatives present. I hope the police were listening.

On another justice theme I attended the new High Sheriff’s service for Sussex judges at Worth Abbey on Sunday.  As part of the service we heard three testimonies from a police officer, a judge and a former prisoner. In his introduction the High Sheriff’s chaplain pointed out the ex-con has been in the same jail as the judge who convicted him after being convicted of fraud himself! What an amusing coincidence except the pew of judges in their purple finery in the congregation seemed not to see he funny side.

I will be holding a special street surgery from 10-12 in Southwick Square on Saturday from 10-12 with local councillors hopefully including Councillor Stephen Chipp who managed to break his ankle after falling out of a conker tree. In my day we used to  throw sticks to liberate them – much safer!