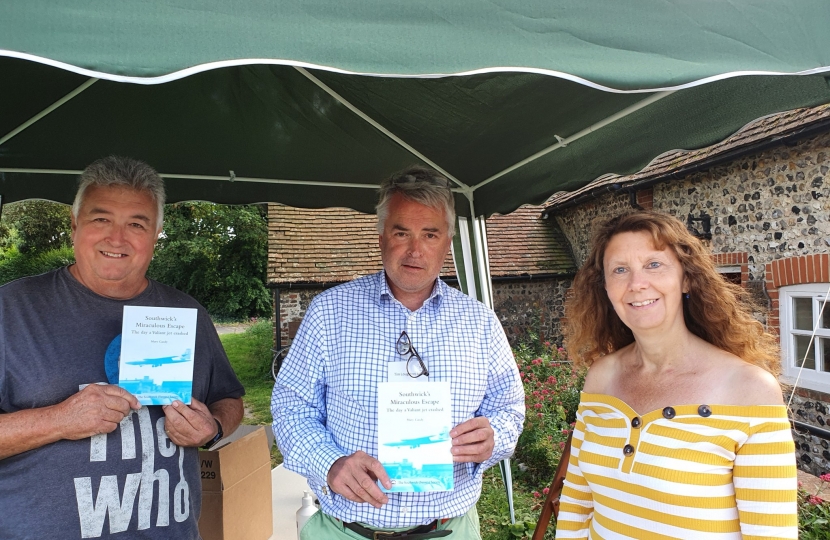 There were lots of good reasons to be in Southwick last Saturday. Firstly, we had a very busy street surgery with the local councillors, one of whom is Stephen Chipp who is also serving as the Chair of Adur Council this year. Secondly, after the surgery and accompanied by the never unassuming Town Crier Bobby Smytherman, on loan from Worthing, Councillor Chipp did a tour of all the shops in the Square as part of his campaign to promote local businesses.

We really are very lucky to have such a good and flourishing range of mostly independent retailers there, helped in part by the fact that as landlords of the Square Adur Council can control the type of shops moving in. This has avoided the flood of takeaways and national chains that too often dominate other high streets and the results are there for all to see, with no empty premises at the moment. There are some great photos on Steve’s social media and if you are not a regular at Southwick Square do go and check it out for everything from luxury chocolate to exotic flowers and fishing tackle and lots more in-between. And the post office is open again under new management too.

As the ward councillor and in addition to his chairman’s year appeal, Councillor Chipp is also organising a project to install a defibrillator in Southwick. This follows on from the excellent work of a former Adur Chair Councillor Joss Loader who funded a number of devices around the district as part of her appeal. The Southwick Square Traders are also looking to fund one potentially at another part of the Square If you would like to donate or help run any events to fundraise then contact stephen.chipp@adur.gov.uk

After the walkabout we went and had a chat with Southwick society chair Mary Candy who was signing copies of her new book ‘Southwick’s Miraculous Escape’ outside the Manor Cottage. It is a fascinating piece of local history where Mary has scoured the National Archives and other local sources to write the story of what happened when a Valiant nuclear bomber crashed into the railway embankment backed in 1956 and narrowly escaped a tragedy on the ground. Tragically but miraculously only the crew lost their lives.

What was particularly fascinating was listening to some of the local residents who came to buy the book and had been in Southwick on the day, in some cases having been at the Manor Hall Road School having lunch when some of the wreckage landed in the school playground. Several people I spoke to remembered that day 65 years ago as if it were yesterday and all had their own views on what had gone wrong. Perhaps Mary’s book will set the record straight after all this time, but it is a fascinating read for anyone interested in local history or who comes from Southwick.