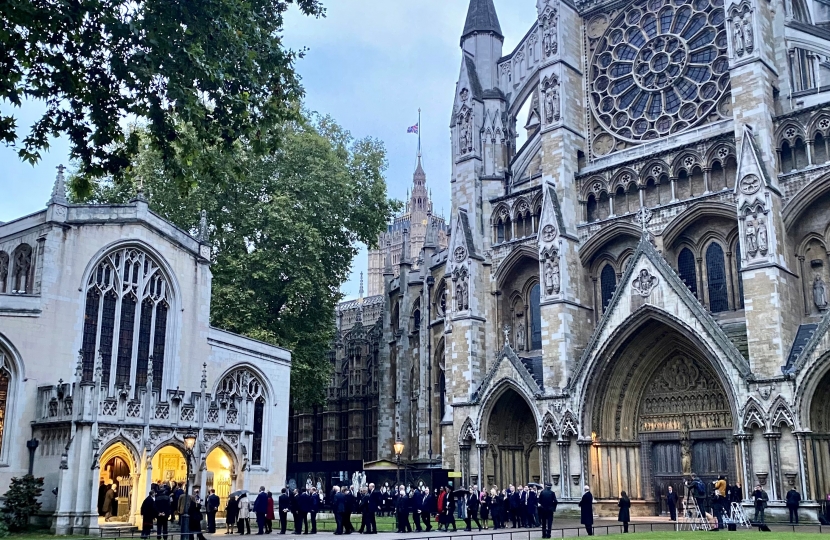 I was abroad on holiday last week when the shocking reports about my colleague and friend Sir David Amess came through. It is difficult to take in such tragic news at any time but being so far from home made it even more difficult to comprehend. I am particularly grateful therefore for the very speedy way that local police tracked me down and made contact to check on my safety. I am also very grateful for the many supportive messages I have received from constituents, not least from those who have often taken issue with me politically, but who all wanted to express their horror and pass on their condolences and to express appreciation for the now even more challenging job that MPs do. It is much appreciated.

Returning to Westminster on Monday there was an inevitably sombre mood about Parliament as we assembled to pay tribute to our late colleague followed by a particularly moving service at a packed St Margaret’s Church across Parliament Square, the House of Commons’ church. There were depressing echoes of the similar fallout to the murder of our colleague Jo Cox, again at a constituency surgery, just over 5 years ago.

I overlapped with David for almost 25 years and like everyone who spoke in the debate to pay tribute to his life have countless stories of his kindness to all, his respect everyone he dealt with, his commitment to the constituency he held so dear and his notorious sense of humour. He above all would have been annoyed to see colleagues so glum at Westminster and so it was fitting that all those who were able to make their tributes included some wickedly funny stories about David’s antics. That included getting the Pope to bless a boiled sweet that he had just plucked from his pocket because he had forgotten to take an object to the Vatican with him to secure the Holy seal of approval.

David had some very strong views on often very sensitive subject such as Brexit and abortion, but it was a mark of the genuine convictions in which he held them and the great affection that he commanded from all sides of the House that even his strongest opponents on some of those issues had nothing but admiration at the way he had always conducted himself born out of respect for other people’s arguments. If I had been fortunate enough to be called by the Speaker in the debate, I would have referred to this as David expertise in encouraging everyone to disagree better when we take different viewpoints.

David was a great proponent of getting out of his office and engaging with his constituents. Whilst we must now seriously review the security arrangements for MPs and our staff, I know that David would be horrified if his passing resulted in MPs becoming remoter from their constituents. It is the essence of the job of an MP. I very much share that approach and will be out again this Saturday at our street surgery in Southwick Square.