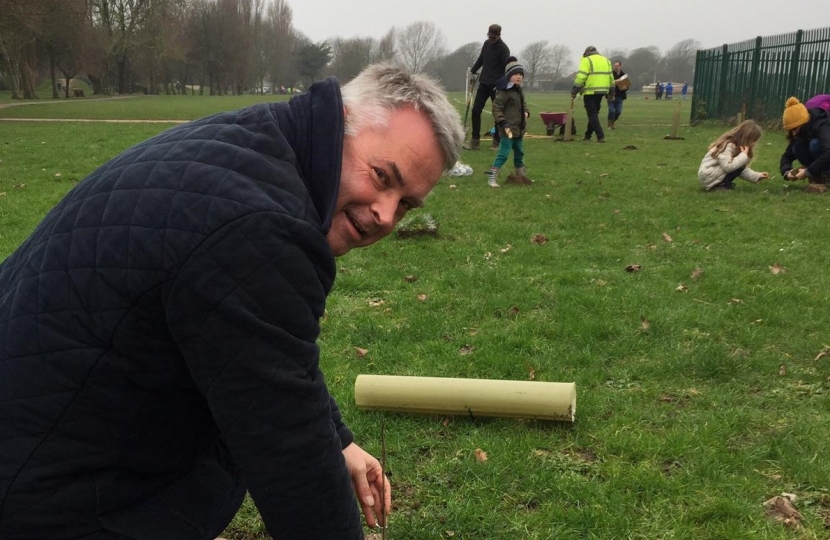 Thank you to all those who have already responded to my ‘Make Britain Breakfast Again’ idea. It looks as though we have a good few interesting breakfast discussions ahead but I could do with a few more Remainers on board to get a true balance.

There was lots of green activity going on around the constituency on Saturday and I joined a group of volunteers planting an area of trees at Southwick Rec. There was a similar exercise at Brooklands in Worthing although they did appear to have rather bigger trees than us!

It was especially good to see the number of young children enthusiastically doing their bit and I hope they will all become fully signed up eco-warriors as part of the Eye Project in local schools. What was not remotely good was subsequently to hear that within 24 hours all our good work had been trashed as some mindless hooligans had decided to uproot the saplings. What on earth did they think they had to gain? Thanks to the Adur park rangers who were out the following day to repair the damage.

I am pleased to report that West Sussex County Council have listened to representations we made along with café and restaurant owners from Worthing and Shoreham and reconsidered their proposals to introduce a flat fee for licencing pavement tables and chairs. The Council are now proposing a much more proportionate sliding scale of charges based on numbers and will be consulting traders to get it right this time.

Before the Election I took Cabinet members from Adur and Worthing along with Town Centre Initiative representatives Sharon Clarke and Diane Guest and ‘Mr Worthing’ Andy Sparsis to meet County Council Leader Paul Marshall and Highways lead Roger Elkins. I am glad they listened to the concerns about the impact the original proposals could have had on our booming local café culture and I hope this is a sign of the new leadership at County Hall paying more attention to our often-neglected corner of the county.

Last year I held a briefing meeting after my visit to the Palestinian Territories with a Palestinian medical aid charity organised by Shoreham Churches Together. I promised to hold a follow up meeting after I had visited Israel and the West Bank with Conservative Friends of Israel for a different perspective, which I did last summer. The report back meeting was delayed by the election, but I am pleased to say that Adur churches have agreed to host a second meeting on March 5th, 7.30pm at Shoreham Methodist Church. All constituents with an interest in the Middle East are welcome to come along and join the discussion. It would be helpful if you would let me know if you are interested in attending to give an idea of numbers.