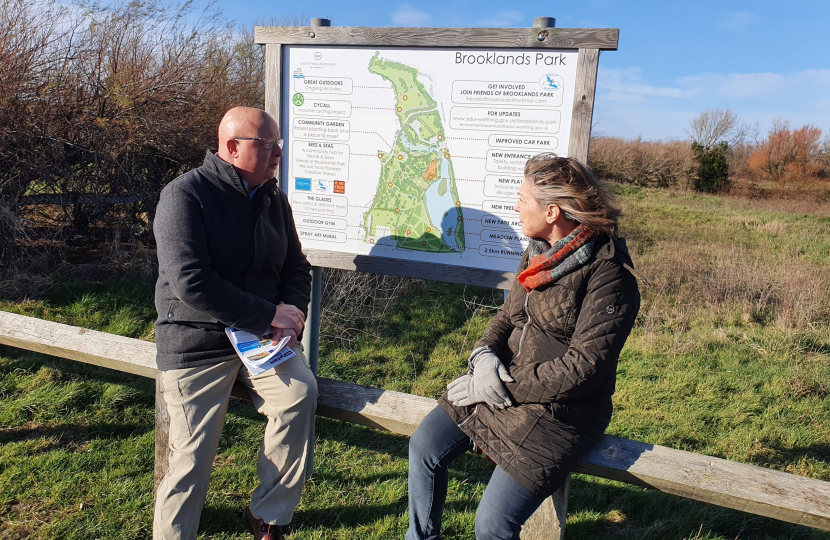 It was good to be able to show off some of some of the great environmental projects currently going on in Adur and Worthing to Environment Minister Rebecca Pow who came down to Worthing on Saturday.

The Minister had specifically read about the EPIC Project which has opened up Sompting Brooks between the Dominion Way Industrial Estate in Worthing and Western Road in Sompting Village and was keen to see it at first hand. Led by the Ouse and Adur Rivers Trust with landlords Sompting Estate, and supported by the Environment Agency, Rampion and Sompting Big Local the project has involved re-routing the Teville Stream.  A new trail is being created to make Broadwater Brook accessible to surrounding communities for the first time and the natural habitat improved by the inclusion of ponds, 1,000 trees, and 2.5km of hedge.

When we were there, it was clear the area is being put to good use by local residents. I was pleased to hear also that the Ouse and Adur Rivers Trust has been invited to advise on the ‘green lung’ which is the New Slats Farm stretch of land to the west of the Saltings bought by Adur Council for community use, helped by a grant from DEFRA. As the DEFRA minister responsible for offshore wind and for sewage, we were able to update her on the Rampion plans, local hydrogen hubs and the Sussex Bay Kelp Farm project as well as our latest wrangles with Southern Water. There really is a lot of very exciting news on the environment front locally.

Less encouraging has been the recent performance of Southern Rail and I joined West Sussex MPs who had asked for an urgent meeting with rail managers last week. Revisions to the timetable have meant an absence of direct trains into Victoria from the cost and other key commuter towns in the County have faced real challenges. On top of this the line will again be severely disrupted from next Monday due to engineering work and many locals like me will either have to drive to London or work from home, which in my case is not an option with various important votes due.

Southern claim that the changes have been necessary because of staff absences of 16-19% due to Covid. Given that the local absence rate in the NHS has been below 6% , and as Employment Minister Mims Davis pointed out at job centres it is under 5%, it is a mystery why train drivers in their very socially distanced cabs have been hit so badly.  Passenger numbers have been recovering and although they hit 635,515 per day last week that still only represents 56% of pre-Covid levels and is still very quiet on Mondays and Fridays.

The direct Victoria trains are due to return from February 28th, but many constituents have understandably complained that having to change twice has added over a third to their journey times and caused huge upheaval. We suggested that commuters should at least be due compensation given they have not been enjoying a full service and we plan to take that further with the Rail Minister next week too.