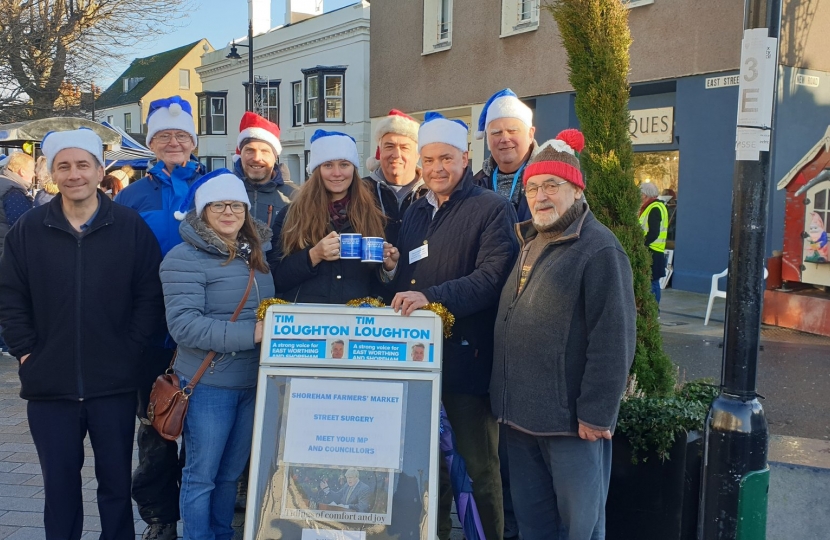 It’s safe to come out from behind your sofa at last – the election campaign is over. No more damp and frozen strangers with rosettes knocking on your door after dark or trying to thrust soggy leaflets through those annoyingly challenging letterboxes with brushes. (Before the election the Government banned low level letterboxes in new build, surely it is time to show further solidarity with postmen/women by banning brushes too?)

The one thing that united all the candidates in the election as well as probably most of the voters is that December elections suck.  And if the Fixed Term Parliaments Act is not abolished, we face the same again in December 2024 by which time goodness knows what climate change will have done with the weather. If the Government doesn’t bring forward legislation to do this I will bring in a Private Members Bill which I predict will be passed with a landslide.

Thank you to all those however who did engage positively with us, which in East Worthing and Shoreham resulted in an increased turnout despite the appalling rain on December 12th.  Thanks also to my fellow candidates for a respectful campaign and a particular thanks to all those who continued to place their trust in me giving me a more than 50% share of the vote for the first time in 22 years. As always, I will continue to represent all the people of East Worthing and Adur however you voted and especially if you were too young to.

After a short catch up on sleep and quick excursion to buy a Christmas tree and try to start some delayed Christmas preparations it was back to work on Saturday with my regular street surgery at the Shoreham Farmer’s Market. There certainly seemed to be a palpable sense of relief from constituents there that we have a clear election result with a majority government which can break the Parliamentary paralysis that has driven us all to despair over the last year and restore stability and certainty.

On Sunday it was back to the TV studios for an election post-mortem on the BBC Sunday Politics show followed by a fantastic display of local musical  talent at the Chairman of Adur Council’s Christmas Carol Service at the Lancing Tabernacle.

This Friday we are due to start the Parliamentary progress of the EU Withdrawal Bill to enable Brexit to happen by the end of January – and this time it will happen. I have  recorded my regular weekly video with details of the procedure at Westminster this week, available as usual on my website and facebook page. My biggest worry though is that we get it done and dusted on Friday in time for me to get back to Lancing to appear in the North Lancing Residents Association Christmas panto – The Wizard of Boz. Then unless we have all been hauled back to Westminster at the weekend I will be in Lancing village for my regular street surgery with local councillors from 10am.

As this is the last edition before Christmas can I wish all my constituents a very happy and Brexit discussion free Christmas followed by a more positive New Year of reconciliation and progress.