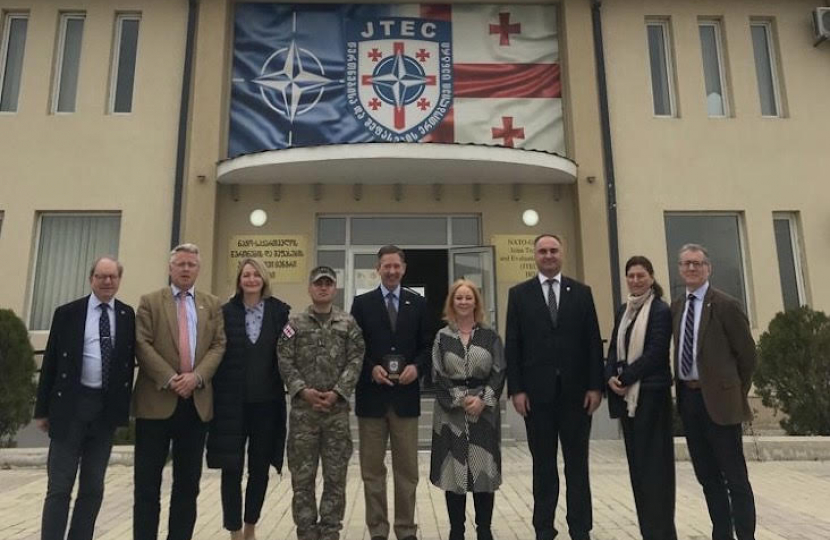 I have just returned from a Parliamentary delegation to Armenia and Georgia whilst Parliament is not sitting during the Easter recess. I chair the All-Party Parliamentary Group for Armenia and we have had to postpone this trip several times due to Covid but given the situation in Ukraine it was more important than ever that we showed solidarity with these countries on the eastern fringes of Europe.

Armenia has been subject to a longstanding dispute with Azerbaijan over the neighbouring territory of Nagorno-Karabakh where the majority Armenian population have been subject to military incursions in recent weeks. The so-called ‘peace-keeping’ force there is Russian and there is concern  that if those troops are withdrawn to fight in Ukraine then Armenia’s neighbour will be free to drive further into their territory. It is a case of ‘better the devil you know’ though we saw no support for Russia’s aggression in Ukraine from all the ministers and parliamentarians that we met.

There is certainly no love lost for Russia in Georgia and Ukrainian flags flew proudly wherever you looked. 20% of Georgia is already occupied by Russian troops in the troubled territories of South Ossetia and Abkhazia and Georgians fear what Russia may do to them whether they are emboldened by victory or humiliated by defeat in Ukraine. Added to this around a million Georgians live and work in Russia and around 10% of the Georgian economy is accounted for by their remittances to family back home.

Added to this Russia remains a big trading partner so any sanctions hit Georgia disproportionately. They are currently applying for membership of both NATO and the EU. Whilst we can no longer help them with the latter and I resisted warning them that it is not all it is cracked up to be, I understand their determination to throw their lot in with the West. Membership of NATO is far more urgent and is something the UK can support. We visited a joint training centre with NATO where British military offer vital support and expertise which is greatly appreciated. Politics aside it was very noticeable everywhere we went that the Georgians hugely respected the robust international lead that the UK has taken in standing up to the Russian aggression in Ukraine and they wanted us to take that message home with us.

Closer to home I will be in Southwick Square with local councillors this Saturday from 11am. See you there.