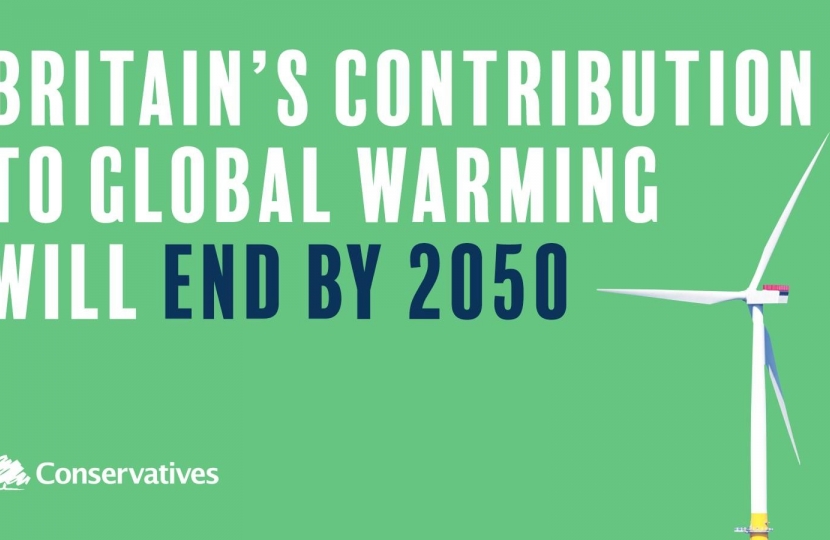 I welcomed the announcement that the UK will become the first major economy in the world to end its contribution towards global warming, as the Conservative Government introduces a new law to achieve net zero greenhouse gas emissions by 2050.

Last year the Conservative Government commissioned an independent panel of experts to advise on achieving net zero. After careful consideration of their report, published in May, the Prime Minister has now announced that the UK will legislate to end its contribution to global warming.

Thanks to Conservative efforts, the UK has reduced emissions faster than any other advanced country in the world, with 2018 the cleanest and greenest year on record. By legislating for net zero, will now go even further, phasing out coal power, committing billions of pounds to develop new renewable technologies and creating hundreds of thousands of low carbon jobs.

I am truly proud that it is the Conservative Party which is legislating to make the UK the first major economy in the world to end its contribution towards global warming.

Climate change is one of the most urgent global challenges we face, and we are leading the world in our efforts to tackle it.

By investing in green industries and decarbonising our economy we will leave the environment in a better state for the next generation – carrying on a long Conservative tradition of making sensible, workable policies that protect the planet while growing the economy.

“The UK has always been a global leader in tackling climate change - from being the first country to raise the issue on the international stage, to cutting emissions faster than all major economies and quadrupling renewable electricity so that over half is now produced from low-carbon sources.

“We want to continue our global leadership and that’s why we are introducing a legally binding net zero target to end the UK’s contribution to global warming entirely by 2050. The report we commissioned from the Committee on Climate Change makes clear that we have laid the foundations to achieve a net zero emissions economy, and that it is necessary and feasible.

“Almost 400,000 people are already employed in the low-carbon sector and its supply chains across the country.  Through our modern Industrial Strategy we’re investing in clean growth to ensure we reap the rewards and create two million high quality jobs by 2030.

“This will create a cleaner, greener future for generations to come.”

Action we have taken

Since the General Election, Conservatives in Government have been actively working to improve animal welfare. We have taken action to: