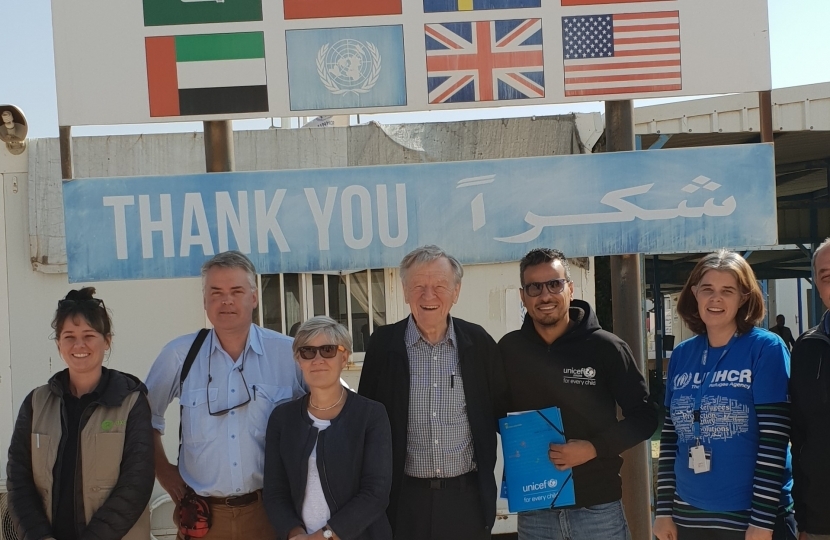 Thank you for contacting me about asylum seekers and refugee resettlement. I am aware what an emotive issue this is and as a long-term supporter of the family Reunion Scheme and having seen the good it continues to do, I am keen to make sure that constituents are aware of the full facts rather than a lot of misinformation and ‘politicking’ that has been going on. To that end I produced a short video specifically on this part of the Brexit Bill recently which you can see HERE

Having visited refugee camps in Jordan with Lord Dubs, I have met and spoken to Syrian refugees fleeing war and persecution and I have seen first-hand the importance of family reunification schemes. Government policy has not changed on this matter. The Government does not need primary legislation to honour its commitment.

We remain absolutely committed to seeking a reciprocal agreement with the EU for the family reunion of unaccompanied asylum-seeking children, and we do not require the Withdrawal Agreement Bill to achieve this.

An agreement on family reunion for unaccompanied children is a matter for negotiations with the EU and isn’t solely in the gift of the UK.  That is why the Home Secretary proactively wrote to the European Commission on 22nd October to commence negotiation on this issue. Clause 37 of the Bill amends our statutory obligation to negotiate to an obligation to make a policy statement to Parliament, in light of this fact.

Home Office Minister Brandon Lewis has provided a very detailed letter in response to all the concerns raised during the passage of the Bill and again I think it is helpful to make that public to provide as much information as possible and you can follow the link HERE. The bottom line is that continuing the Family Reunification scheme does not require primary legislation which means that it need not be included in the forthcoming Immigration Bill and it can go through Parliament much more speedily just as soon as the EU agrees the format of a new scheme. There are improvements which need to be made to the workings of the current scheme which I have previously pointed out. These include speeding up the process for identifying suitable children and bringing them to the UK and making sure that welfare checks in the UK at their new homes are prioritised. None of these issues would be dealt with by amendments to legislation let alone the Brexit Bill.

I hope you can appreciate therefore that far from doing anything to undermine the Family Reunification Scheme the Government is absolutely committed not just to carrying it on but improving its effectiveness.

Thank you again for taking the time to write to me

It is remarkable how a little bit of sunshine and buds appearing on the trees can lift the spirits.