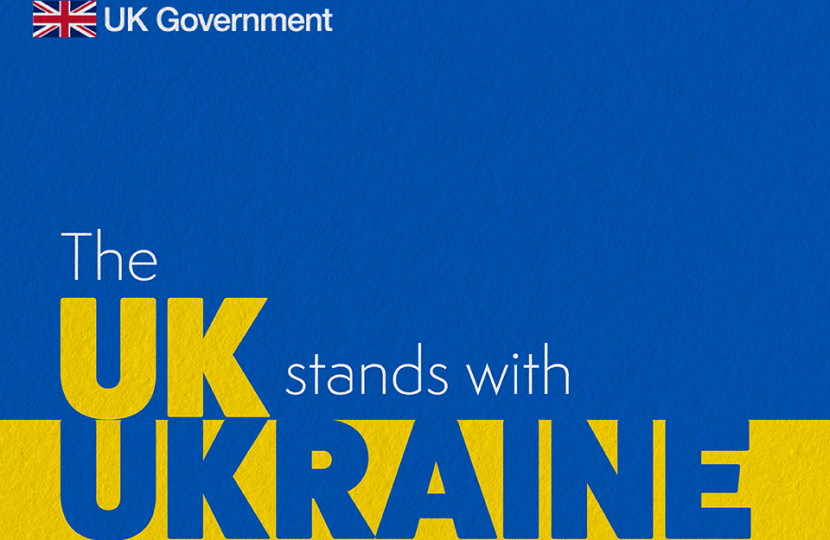 Not surprisingly I have been inundated with emails this week from constituents rightly concerned about the situation in Ukraine and the increasingly ruthless aggression by the Russian military. Many people have asked what practical help they can give with many generously offering accommodation to refugee families. Others have expressed frustration that NATO should be taking direct military action and some people have been critical of the response by the Home Office in particular in responding to the crisis. With this bulletin therefore I will try to cover all those areas and more and will continue to post updates as more information and guidance becomes available in this fast-moving situation.

West Sussex already hosts residents and visiting workers from Ukraine, Russia, Poland and other impacted countries. Our thoughts and our prayers are with them at this time. To be clear, it is Putin’s actions that we condemn, not the people of Russia who are also victims of this situation.

Last weekend I spoke to a number of Ukrainian constituents to hear their take on the situation from their friends and family still in Ukraine, and what practical support they are asking for. I have reported back to ministers with that information and have challenged the Home Secretary, Defence Secretary and others in the Chamber of the House of Commons. There have been other events across Adur and Worthing where local people have come out to show their solidarity with the people of Ukraine.

In addition, we heard directly from the Ukrainian Ambassador and refugee groups in front on the Home Affairs Select Committee on Wednesday, and many of you will have seen the historic and moving address by the Ukrainian President by video link to MPs on Tuesday. Next Wednesday we have the Immigration Minister in front of the Select Committee together with the newly appointed Ukrainian Refugees Minister, to question further.

I fully support the extensive actions the Government has taken in support of Ukraine, and the Prime Minister has been at the forefront of rallying western nations to impose the historically most extensive sanctions against Russia and Belarus ever seen. In addition, we have now given more humanitarian aid than any other country and the provision of high-grade military kit made more effective by months of training Ukrainian forces by our own military over many months before the conflict started.

However, I share the exasperation of many at the bureaucratic approach and apparent lack of urgency demonstrated by the Home Office. Essentially, they have tried to adapt an existing migration management system to deal with what has quickly become a full-blown humanitarian emergency. This is all the more frustrating as the Government announced early on that there would be no cap on the numbers of Ukrainian refuges we would welcome in the UK and 100,000 or 200,000 were mentioned.

Subsequently the Home Office has belatedly moved up a gear and details of new wide-ranging schemes have been announced and will be set out in more detail in coming days. I have given as much information as possible about these below. For those who have said they are ashamed at the response of the British Government, largely prompted by the apparent prevarication from the Home Office, I beg to differ strongly, and I think we should be very proud of the following:

Be in no doubt, that all these measures combined represent the biggest set of actions against a hostile nation ever, barring committing to direct military conflict which obviously remains a possibility if Putin continues to refuse to heed the warnings of the rest of the world from which he has become very largely isolated.

If you are Ukrainian and need help obtaining a UK visa for a family member who has fled the conflict and made it to Hungary, Poland, Moldova or Romania, please do not hesitate to seek my assistance. I am not aware that we have a substantial Ukrainian community in Adur and Worthing, but we have already taken up some specific case for family members.

You can apply here: https://www.gov.uk/guidance/apply-for-a-ukraine-family-scheme-visa

The Ukraine Family Visa scheme has been updated (in close consultation with the Ukrainian government and diaspora community) so that from Tuesday March 15th, Ukrainians with passports can get permission to come here online and give their biometrics once in Britain, meaning they no longer need to physically visit Visa Application Centres, which can focus efforts on helping those without passports. So far over 22,000 people have applied and as at today over 3000 visas had been successfully issued and that rate is accelerating and not before time.

I have been calling for necessary checks to be carried out in the UK rather than in the chaos of the borders with Ukraine and at least the situation has been made easier by facilitating applications online rather than having to travel great distances to a UK visa office. Whilst security checks for the mostly women and children seeking to come to the UK need only be minimal, I do support the issuing of visas so that we know exactly who is coming to the UK and how we can best support them, but this process should be as streamlined as possible. I will be monitoring the new system when it comes online and feeding back any problems reported to me to make improvements if necessary.

Overall, it is estimated that the Ukrainian community in the Uk amounts to some 50,000 – 60,000 people and it is highly likely that they will want to offer accommodation and help to family members wherever possible, so that offers from the public can be concentrated on those without direct UK family connections. The view of the Ambassador, which I share, is that the many women and children and elderly folk who have come across the border having had to leave husbands, sons and fathers behind will want to stay as close to Ukraine as possible in the hope of early reunification and a return home. In which case the numbers coming to the UK could be in the tens of thousands rather than hundreds of thousands though if the conflict is a protracted one then obviously that could change.

Unlike many Syrian and Afghan refugees who may find it much harder to return home and will be in the Uk for the long haul, the Ukrainian Ambassador hoped that they will be able to return home soon and will certainly want to do that. For those who do come to the UK they will be able to work legitimately, access health and education services and be given money to live, no doubt supported by many local community networks who want to extend a warm welcome, quite rightly.

A Ukrainian-language advice sheet for refugees is available here:

The details of the new scheme whereby people can offer accommodation to Ukrainian families will be set out in details on Monday March 14th and will be led by the Department for Levelling Up, Housing and Communities. Essentially people will be asked to commit to offering rooms/annexes/spare flats etc on initially a 6-month basis and will receive £350 per month to help with that. The refugees will be given money for subsistence directly and local authorities will be given over £10,000 per family to provide support. People qualifying under this scheme are likely to start arriving from this Friday and I have asked for the Government to charter planes to help with the transport or allow our military planes delivering aid to come back full of people.

It will certainly be poetic justice if some of the confiscated Russian oligarch’s mansions are offered to house refugees. There will be a central hub to match up offers with refugees and I will post a link to details when available after tomorrow. In the meantime, people can also contact West Sussex County Council with offers of help using:  Ukrainesupport@westsussex.gov.uk

To make a donation

I am aware that some local people and organisations have been organising collections of particular goods and food. This is wonderful but not necessarily the most practical way to help at this stage. The Ukrainian Ambassador particularly referenced the fact that they were receiving many children’s bicycles which whilst nice was not the best use of space in an already stretched infrastructure on the Polish border especially.

The Polish Embassy has issued the following guidance:

For the last several days, the Embassy of the Republic of Poland in London has been receiving information about the readiness of UK-based people of good will to support humanitarian aid efforts in Poland for those affected by the war in Ukraine. We would like to express our sincere gratitude for the assistance provided by many entities and individuals.

Currently, humanitarian assistance on the territory of Poland is provided under the Polish government coordination mechanism: www.pomagamukrainie.gov.pl.

Priority: One of the main priorities for the provision of assistance is its effectiveness in reaching the largest possible group of people in need and meeting their specific needs as efficiently as possible, taking into account the dynamics of the conflict itself and the situation of the people affected, as well as optimising the resources and reducing the costs of the assistance provided.
Action: Any actions undertaken should not disrupt the local economy and should draw as much as possible on the expertise of the entities experienced in the provision of professional assistance in order to manage it effectively.

We call on everyone wishing to help not to organise further collections of in-kind donations, as their transport to Poland – followed by a lengthy unloading, storage, selection and distribution procedure – generates disproportionate amounts of additional work and cost, which proves ineffective and counterproductive to the needs of those affected.

We encourage everyone wishing to help to organise fundraisers and direct donations of funds to verified organisations that will use the funds received for assistance provided in accordance with the strict needs and effective operation in the long term.

In the circumstances it would probably be better therefore to hold back on clothes and toys and the other bulky goods until Ukrainian refugees arrive in the Uk and they can be handed over directly. Otherwise the best contribution is to donate money or fundraise and pass the proceeds on to one of the main organised charitable bodies who have the capacity to purchase what is most needed on the ground and make sure it reaches the right target.

This is the best way to donate as the money will go directly to the front line and all public donations will be doubled by the UK Government, so your donation counts twice. Money spent making purchases close to the frontline in places like Poland and Moldova will also help the local economies there which are being severely stretched by the huge influx of over 2.2m refugees so far.

Ukrainians travelling to the UK:

Several travel companies are offering free travel to get to the UK:

For Ukrainians arriving in the UK, The Red Cross have published this guidance leaflet with helpful advice and details on support services and other applications.

If you are organising an event or appeal in support of Ukraine, please contact me at loughtont@parliament.uk and I will add details to this page.

Show your support on social media:

Please tag your posts #StandWithUkraine to show your support as part of a global online movement.

I am sorry for the length of this bulletin but wanted to be as thorough as possible and please do not hesitate to contact me directly or by leaving a comment here if there is more information you need.