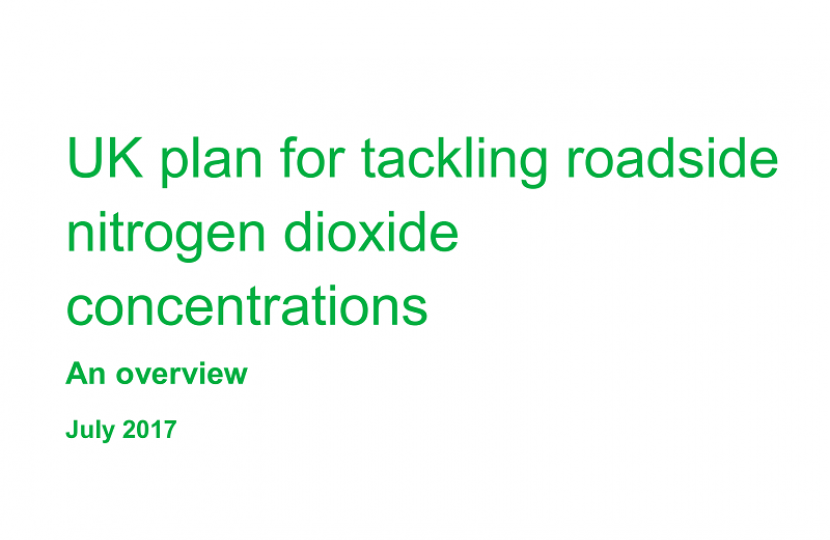 OUR PLAN TO REDUCE AIR POLLUTION WHILE PROTECTING DRIVERS

I am writing, on the behalf of Jesse Norman and myself, to give you information on Defra and DfT’s joint publication, The UK Plan For Tackling Roadside Nitrogen Dioxide Concentrations.

Air quality has significantly improved since 2010, with UK emissions of nitrogen oxides falling by almost 20 per cent between 2010 and 2015. The number of days with pollution in urban areas has fallen by two-thirds since 2011.

However, the failure of European emission regulations and poor advice to drivers from the Labour Government has left our air more polluted than it should be. European vehicle emissions regulations have failed to achieve what they were designed to achieve, while Labour’s policies led to a dramatic increase in diesel vehicles which are the biggest source of nitrogen oxides in the air. We would not be breaching legal pollution limits if there had not been cheating and evasion by car manufacturers, due to the flawed EU standards, and if the Labour government had not encouraged people to buy diesel.

We therefore have to take action, but we must do so in a sensible, proportionate way. The appropriate response to the need to comply with the law is targeted, local action to tackle dangerous chemicals in key pollution hotspots, with a series of common sense measures that do not penalise drivers who did the right thing. This is indeed a local issue and tackling air pollution is a devolved matter. The plan sets out action being taken in the Devolved Administrations, in cities such as Glasgow, Cardiff and Belfast, as well as London.

That is why we are asking local councils in England to consider what is the right, targeted local action to meet the specific problems in their areas. We have produced new analysis which shows that out of 1,800 of Britain’s major roads just 81 are due to breach legal pollution limits for Nitrogen Dioxide. Most of these roads are in London, with only 33 outside. In many towns and cities, just a single road is due to be breaching air quality limits. We believe it would be unfair and disproportionate to impose charges on drivers across those towns and cities to deal with such a localised problem.

Instead, we want local councils to explore other options, such as cleaning up their local transport systems through retro-fitting, changing their road layouts, or reconfiguring traffic lights. We want to address the Labour Government’s legacy of the road humps, pinch points and poorly managed traffic lights that create congestion and pollution. Designing out and removing such obstructions can improve air quality and improve traffic flow.

We will provide expertise to help local authorities develop these plans and we will also provide substantial funding. Overall we are spending £3 billion on improving air quality and reducing vehicle emissions, and £255 million of this has been specifically set aside to help councils develop their local plans to bring Nitrogen Dioxide levels within legal limits. In the autumn we will put further money into a Clean Air Fund to provide more support to councils to make the necessary changes.

In some areas, it may be the case that such measures are not sufficient and restrictions on polluting vehicles are required. This could mean preventing certain cars using certain roads at particular times of the day, or it could mean a charging system. However we are clear that all other options must be explored first. Councils have 8 months to produce initial plans and until the end of next year to produce final plans. Critically these plans must be signed off by government – so if we are not satisfied that their measures are sufficient, or if we assess their plans to be unfairly punitive to drivers, we will not approve them. And if there is no other option but to impose restrictions, those restrictions should be lifted as soon as legal compliance is achieved and there is no risk of breaching it again.

Drivers of diesel vehicles should not be unfairly penalised for others’ mistakes. In the Autumn we will also launch a consultation on measures to help drivers, including a possible scrappage scheme. Clearly such measures must provide value for taxpayer’s money, be carefully-targeted, and minimise the risk of fraud or abuse, but we must explore every option to help drivers.

We also do not want councils to seek to impose higher parking charges on vehicles or specific types of vehicle. Since 2010, Conservatives in Government have implemented a series of policies to rein in over-zealous parking enforcement that was encouraged by the last Labour Government, and those policies remain in place.

We believe the surgical approach of targeted interventions that we have set out is right – right because it will be more effective at reducing air pollution and also right because it will ensure motorists are not unfairly and disproportionately penalised. The wrong approach would be to impose a national network of charging zones – which is what Labour is proposing.

This package is part of a broader programme to deliver cleaner air and a healthy environment. Next year we will publish our Clean Air Strategy addressing all pollutants, not just Nitrogen Dioxide. We want a stronger and cleaner economy: supporting local businesses and economic growth, whilst minimising harm to the environment. Our industrial strategy will ensure a Global Britain is at the forefront of developing new, innovative, cleaner technologies – including supporting new battery technology unveiled by Greg Clark this week. The government will also end the sale of all new conventional petrol and diesel cars and vans by 2040, with almost every car and van on the road zero emission by 2050.

I recognise that many colleagues receiving this letter will represent constituencies that are directly impacted by this Plan. I can assure you that our Departments will be working closely with all relevant councils as the Plan is implemented. Please do get in touch with any further questions.

What does the Government’s £3 billion programme to improve air quality consist of?

Q: This is just the same as your draft plan. What is new?

We’re injecting more urgency to tackle poor air quality in hotspots in towns and cities by requiring initial council plans to be drawn up within eight months and providing £255 million to accelerate action.

We’ve confirmed we will end the sale of new conventional petrol and diesel cars and vans by 2040, and we are providing £255 million to councils to accelerate air quality plans bringing total investment in improving air quality to £3 billion. We have committed to a new Clean Air Fund to cut congestion, improve public transport and help motorists move from diesel to cleaner vehicles. The size of the Clean Air Fund will be announced in the Autumn and will be in addition to the £3 billion. We’ve also committed to a new Clean Air Strategy for 2018 which addresses wider causes of pollution.

Q: How will you deliver your promise to rid our streets of all diesel vehicles by 2050?

We have a manifesto commitment for almost all cars and vans on our roads to be zero emission by 2050. To help deliver that, we have announced that we will end the sale of all new conventional petrol and diesel cars and vans by 2040.

In 2011 we first set out our ambition for nearly all new vehicles to be zero emission from 2040 - we have now confirmed the first step towards this by confirming that no new conventional diesel and petrol cars and vans will be sold from 2040. We hope legislation won't be required as we want to work with industry to achieve this commitment. The Department for Transport will set out more detail on how this will be achieved in its strategy on the pathway to zero emission transport for all road vehicles, due to be published by March 2018.

Q: Why are you forcing local councils to implement these changes, shouldn’t this be a government decision?

We believe that the best solution to these problems – which are often very localised – should be found through local solutions. The Government will work with, and support, local authorities to produce plans that achieve compliance with improved air quality in the shortest possible time.

Plans will be assessed by government to make sure they are effective, fair, good value and will deliver the required improvements in air quality in the shortest time possible. If local plans do not meet that test, government will require councils to take action to achieve legal compliance. And we have provided a £255 million fund which councils can access, to accelerate air quality plans bringing total investment in improving air quality to £3 billion.

We don’t believe charging should be the first approach that is considered by local councils, and we are clear that local authorities should exhaust all other options before opting to impose charging. Any restrictions or charging on polluting vehicles should be time-limited and lifted as soon as air pollution is within legal limits and the risk of future breaches has passed.

Q: Why won’t you implement a Diesel Scrappage Scheme, like the Mayor of London has suggested?

We want to help drivers who bought diesel cars in good faith make the transition to cleaner vehicles. We’re considering all options to help motorists and businesses move away from diesel which is why we will issue a consultation in the autumn to gather views on measures to support motorists, residents and businesses affected by local plans, such as a targeted scrappage scheme for car and van drivers in most need of support.

Don’t forget why this is an issue in the first place: the last Labour Government incompetently encouraged people to buy diesel cars and we are taking action to put it right.

The objective of the A27 Working Group is to demonstrate to the Government the overwhelming economic, environmental and social case for improving the A27 across West Sussex.