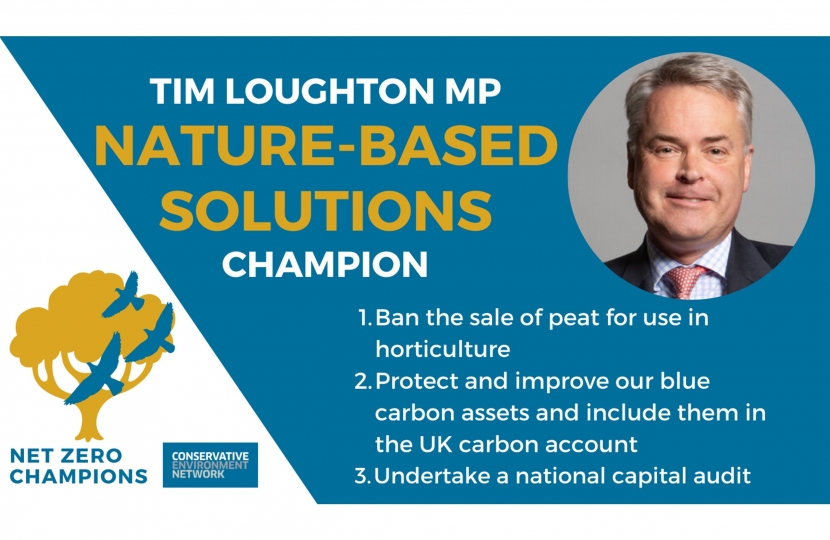 I have today signed up to become a nature-based solutions champion, to help accelerate action on climate change in Parliament, as part of the Conservative Environment Network’s new Net Zero Champions initiative. I will be working with 24 other Conservative MPs to promote a range of technological and natural solutions to climate change, to ensure that the UK creates more green jobs as part of the post-Covid economic recovery and further reduces our greenhouse gas emissions.

In June 2019 the UK was the first major economy to set a legally binding target to reach net zero emissions by 2050, following a Parliamentary campaign led by CEN MPs. Since then, the Government has announced a number of new world-leading climate policies, such as the commitment to end financial support for fossil fuel projects abroad and a ban on the sale of new petrol and diesel cars by 2030. The Government last November launched a 10-point plan for a green industrial revolution, backed by £12 billion of public funding, which aims to create up to 250,000 new jobs in industries of the future like hydrogen and carbon capture.

However, in their latest progress report to Parliament, the independent Climate Change Committee outlined multiple areas where policy gaps remain in order to get the UK on track to net zero. The CEN Net Zero Champions will be campaigning for policies to close those remaining gaps ahead of COP26 UN Climate Summit, which the UK is hosting in Glasgow in November. The Government is due to publish a comprehensive net zero strategy ahead of the summit, which will set out a pathway towards the long-term net zero goal.

As a nature-based solutions champion, I will be campaigning on:

● 1) banning the sale of peat for use in horticulture to better protect UK peatland which covers 12% of the UK’s land area and contains more carbon than the forests of the UK, France and Germany combined;

● 2) protecting and improving our “blue carbon assets” which are marine habitats that soak up carbon, such as seagrass meadows, and including this carbon sequestration in the UK carbon account to encourage the government to protect and restore them as part of efforts to reach net zero emissions; and

● 3) undertaking a national natural capital audit, to establish a baseline of our natural assets, such as woodlands, wild-flower meadows, and grasslands, and map opportunities for nature-based interventions to ensure we target, for instance, new tree planting in the right places.

Tim Loughton MP said: “I’m delighted to be working with the Conservative Environment Network on this great initiative, as part of my commitment to my constituents to champion action on climate change in Parliament. As the hosts of the Glasgow Climate Summit in November, the UK needs to be at the front of the pack globally in tackling carbon emissions. This Government has already taken some big steps forward on climate change, but we now have to go even further to get on track to our world-leading target of achieving net zero greenhouse gas emissions by 2050. That’s why I’ll be campaigning inside Parliament for further policies for nature-based solutions that will cut emissions, while also creating green jobs across the UK.”

Sam Hall, Director of CEN, said: “We’re delighted that Tim is going to be a champion for nature-based solutions inside Parliament. Tim is a tireless advocate for green jobs and for ambitious climate action in Westminster and in East Worthing and Shoreham. Tackling climate change is so important not only because it helps reduce the risks of flooding and heatwaves, but also because it will create jobs in the industries of the future, and make our towns and countryside more pleasant places to live with cleaner air and more access to nature. Our champions will be working together in Westminster to drive action on climate change and to propose new policies to ensure we hand on a greener world to the next generation.”