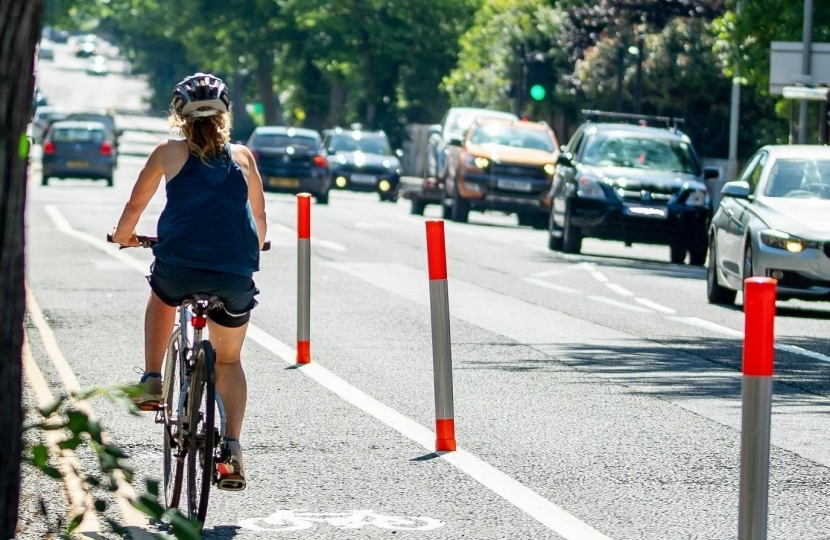 So far, I have had one constituent writing to me in support of the new cycle lane having ridden into town in Worthing. Enough said.

On the deficit side I was asked to meet some of the traders in Broadwater last Friday who it is safe to say are not the biggest fans of the Covid pop-up cycle lanes as they are officially called, together with the loss of parking spaces outside the church. I am afraid this is a familiar response from traders and shoppers alike in Lancing village centre and Shoreham High Street. Only Southwick Square has been spared the parking cull due to its relatively wide pedestrian areas.

Whilst talking to some of the shopkeepers my mask didn’t prove sufficient disguise to avoid several passers-by coming up and berating me if I had anything to do with the traffic chaos being caused by the cycle lanes. The answer is of course no and I have said very clearly that I think they have been put in the wrong place, they are hardly used and in places even cyclists have said that some of the junction markings are unclear and potentially dangerous. In Shoreham at least Adur council have argued for some changes to the intended route but there are still a lot of unhappy people.

The County Council have maintained all along that they are temporary and if they really are counter-productive they can be moved. I have asked that they audit the number of bicycles that are actually using them and whether crowding on pavements really is serious enough to merit taking out parking bays, and if not let’s get back to normal. With schools and many more firms going back to work physically this week, if they are not being used now then probably they will not be in the future.

Last week MPs had a useful conference call with the Chief Executive and new Chair of the Local Economic Partnership. I was pleased to hear that they are very much adopting the building back stronger, smarter and greener approach to getting the economy kick started again. The Coast to Capital LEP is one of the largest in the country representing with an economy of around £58bn alone. With 80% of jobs in Crawley being impacted by Gatwick and many people in my constituency working there, we face particular challenges.

Interestingly over half of all coastal towns in the UK are classified as in the highest risk group for economic fortunes and I will continue to make the case for special support for our local urban coastal strip communities. Essential to that is making sure we have suitable business space available for quality jobs which is why I am opposing the proposal to convert a part of the Lancing Business Park into residential dwellings. This is the second largest business park in the county hosting around 230 businesses and is almost completely occupied. We know we need more houses but you need jobs to go with them which is one of the points I made in the excellent debate on Monday on the impact of housing development in West Sussex initiated by my neighbour Andrew Griffith.