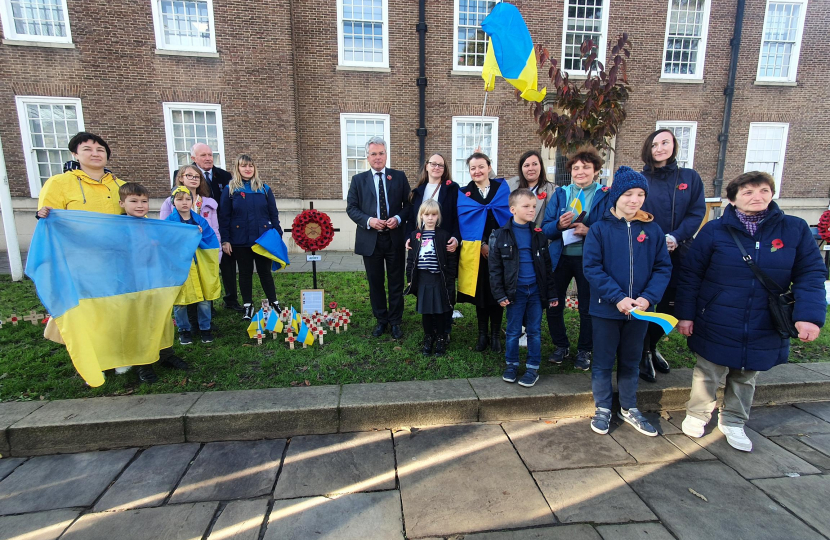 It was the first Remembrance Day I can remember when I didn’t need to dig out my winter overcoat for a day of parades and tributes. I am sure the warm autumn sunshine helped but the crowds seemed bigger than ever. It is always especially gratifying to see so many youngsters taking part in the marching and laying of wreaths including the new very sweet Squirrels troop in Lancing.

There was also an especially warm welcome for the Ukrainian families who took part in the Worthing parade and laid a poppy wreath draped in the yellow and turquoise of their national flag. I was particularly touched that they had placed 6 Ukrainian flags in front of one of the crosses in the Garden of Remembrance to honour the 6 Britons known to have been killed fighting alongside the Ukrainian army. It is with good reason that our Ukrainian friends have been so warmly welcomed in Worthing and Adur.

Last week I joined the Home Affairs Select Committee on a follow-up visit to the Manston immigration processing centre after all the horror stories about more than 4000 people crammed into a facility only built for around 1000 people for up to 24 hours. The numbers had reduced to below 1300 but largely down to the rough weather in the Channel but that will only be a temporary lull. The staff from Border Force, the army and contractors are doing an incredible job there in very challenging circumstances and in the long-term it is not sustainable.

Solving this problem is complex and has to involve the French doing more to stop the criminal people traffickers getting the boats in the water in the first place and so the new agreement with France is a help. But on this side of the Channel the Home Office has to up its game in speedier processing of asylum claims and removal of those who are not legitimately fleeing danger or persecution so we can give safe haven to those who genuinely are.