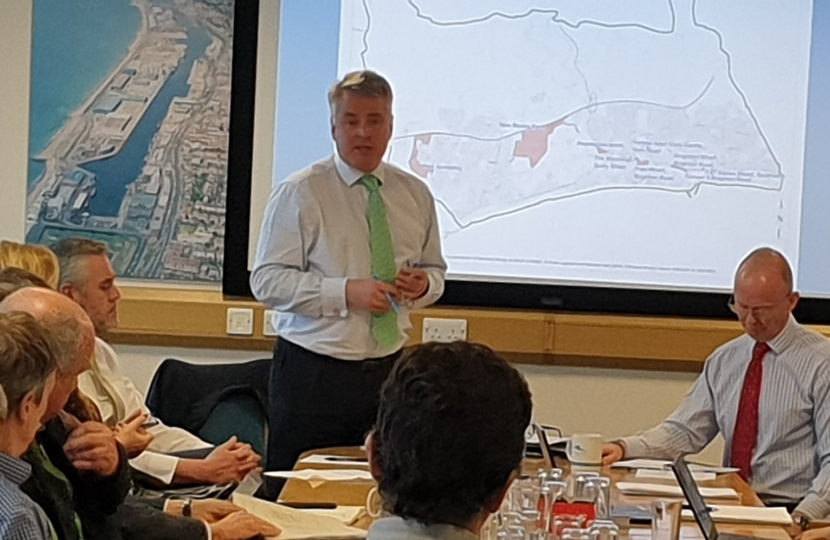 Last Friday I hosted a Shoreham ‘Infrastructure Summit’, kindly hosted by Shoreham Port Authority, to bring together key players to look at the increasing problems of congestion and traffic flow in and around Shoreham. The initiative was sparked by recent traffic works on the A259 caused either by emergency repairs or scheduled work on new developments encroaching on the highway, which had led to complete gridlock and in turn a deluge of complaints to me and Shoreham County Councillor Kevin Boram, amongst others.

Unfortunately, we are likely to see more of this as the popularity of Shoreham leads to more and more residential building yet with precious few road improvements to go with them. I have objected to some of these developments, yet the Council is often between a rock and a hard place as we are told we need more homes to alleviate the waiting lists and what used to be a relatively little visited backwater Shoreham has become a victim of its own success.

I wanted therefore to address 3 challenges:

Not much to see there then! I am grateful to all the stakeholders who came including highways officers, utility company managers, developers, transport companies and the Shoreham Bycycle group.

We had a really good discussion and new initiatives such as the ‘Lane Rental’ scheme will mean much tighter control of works by utility companies on the highway for example. But clearly we need better governance, better joined up thinking between planning permission and the viability of transport hubs, more transport friendly coordination by large employers and a whole host of other things.

Inevitably our discussions gave rise to a string of further work projects and I will be looking to coordinate those over coming months. In due course I will bring together a number of local community groups and representatives to engage them in this important work before Shoreham becomes one large car park just as the A27 grinds to a co0mplete halt too. I will be publishing a short video on my website soon to provide more details.

My weekly video from Worthing Hospital car park, the location of ‘Shopital’. Thank you so much to all our volunteers, to Focus in Shoreham who have been providing ready meals, Andy Sparsis and his fresh pasta, Truffles and their mounds of bread and loads of other people.