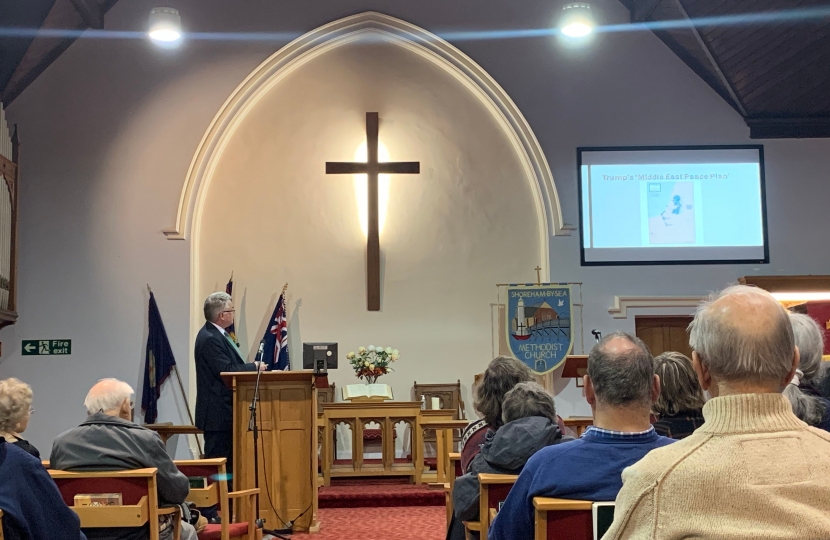 I am very grateful to Shoreham Methodist Church and the Adur Churches Together for hosting my latest report back meetings last week after my trip to Israel and the Palestinian Territories last year. Despite the appalling weather conditions there was a fairly full church and a lot of questions about what I had seen and who I had met as part of a delegation of Conservative MPs.

Whilst out there we covered everything from the bustling high-tech economy that is Tel Aviv, new Palestinian skyscrapers emerging from the West Bank desert in contrast with the abject poverty that many displaced Palestinians are forced to live in with a surprise appearance from ‘spoon bender in chief’ Uri Geller thrown in for good measure.

Since I was last in Jerusalem last August there have been not one but two further General Elections including last week’s, and Israel remains without a majority Government. The Israeli electoral system is never easy to understand and with 120 MPs elected from 30 different parties ranging from Palestinian Arabs to Ultra-Orthodox Jews forming a new coalition is no easy task. A fourth election is just over a year is a possibility making our ‘little post-Brexit local difficulty’ in the UK last year look like a tea party in comparison! I hope I made a good fist of bringing constituents up to date on this sensitive issue in a very volatile part of the world which always weighs heavily in my email box.

Before the meeting I attended a fascinating presentation at the Ricardo Innovation Centre in Shoreham for Coastal West Sussex businesses. We heard presentations from a  range of business ‘gurus’ including a Futurologist describing how most of the jobs that we will be doing in 20 or so years’ time have not actually been invented yet and how quickly people and businesses are changing the whole way we go about performing our work. Who knows we may not even need MPs by 2050! The 2 things most businesses agree we will need however are a functioning A27 and a major upskilling of the workforce. Sounds familiar from our objections to IKEA at New Monks Farm!

This Saturday I will be holding two drop-in surgeries. As usual I will be at Shoreham Farmer’s Market from 10-12 followed by Starbucks in Broadwater Street West in Worthing from 2.30 so do drop by. Also don’t forget I am taking names for my next Make Britain Breakfast Again event and I would especially like to hear from Leavers who would like a free breakfast and a constructive respectful discussion. Email me at loughtont@parliament.uk

My weekly video from Worthing Hospital car park, the location of ‘Shopital’. Thank you so much to all our volunteers, to Focus in Shoreham who have been providing ready meals, Andy Sparsis and his fresh pasta, Truffles and their mounds of bread and loads of other people.