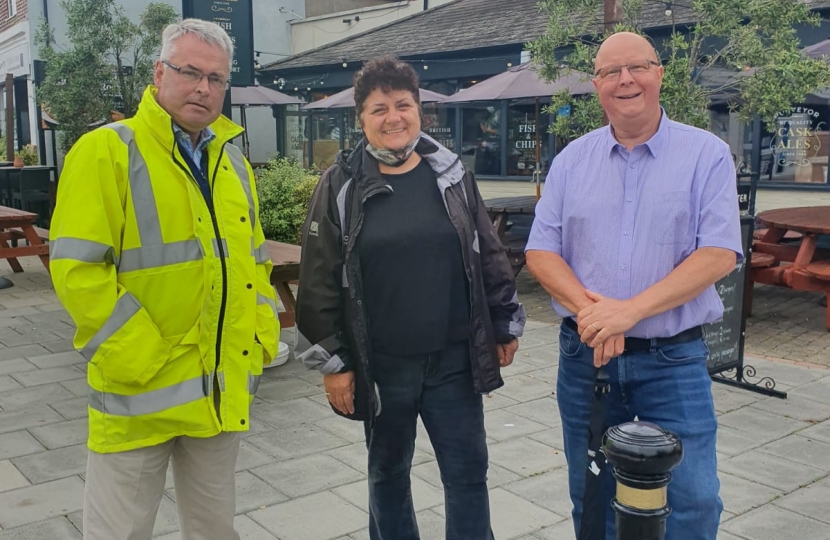 I spent an interesting morning last week with the newly formed Broadwater Village Traders Association led by Diane Guest and Lisa Evans, and Deputy Leader of the Council Kevin Jenkins, having a snoop round to see how we could give the area a facelift. Broadwater is one of the oldest parts of Worthing, its church the oldest surviving building in the town. Indeed the ‘village’ of Broadwater only become part of the Borough of Worthing in 1902.

Local traders would like to spruce up Broadwater and restore a more village feel with decorative gates and improved signage. The un-adopted grass area outside the parade of shops has already benefitted from the new sign and boat maintained by the Community Association and there are plans for bike racks and measures to keep inconsiderate drivers from blocking the pavements. A bit of organised rewilding wouldn’t go amiss at the open space at the southern end of the village too. Above all the Traders are keen to organise some community events to get people out and about again as soon as we are allowed, so watch this space.

The issue of defibrillators came up at our street surgery in Southwick Square last Saturday and I am delighted that Southwick Green councillor and Adur Chairman Stephen Chipp will be fundraising to install two of the lifesaving devices at either end of the Square. A previous Adur chair Joss Loader did a great job in using her year in office to install the machines across the district, but we still need more. Their importance has obviously been even more highlighted by events on the pitch at the European Football Championships. If you would like to help with the fundraising, perhaps having planned to help with the roof appeal for the St John Ambulance HQ in Southwick which we reached early, then do get in touch with Councillor Chipp.

This Sunday I hope to join the latest Callie Beach Clean on Shoreham Beach in support of Sea Shepherd, the RNLI and Surfers Against Sewage. Volunteers are asked to meet at the end of Ferry Road by the footbridge at 10am and all the gear is being provided by Surfers Against Sewage. This is a great initiative by Callie’s family to celebrate her 3rd birthday, support some good causes and keep Shoreham Beach clean. You can find more details here: www.justgiving.com/fundraising/Callie-Beach-Clean-SAS