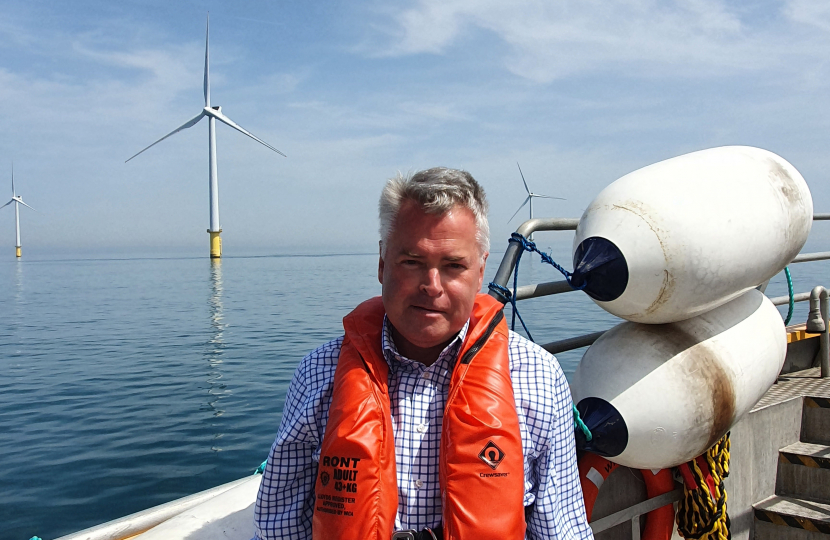 Last Friday was a lovely day for a trip on the water and so it was that Sir Peter Bottomley and I were invited to visit the Rampion wind farm. It was also particularly good timing for a couple of enthusiastic work experience students from the Sir Robert Woodard Academy who have been working in my office in Westminster and a particularly welcome distraction from revising for A level exams.

I have been a big fan of Rampion since it was first proposed and started generating electricity in 2017 and the UK is now leading Europe in offshore wind power and as subsidies have been slashed the cost has come down considerably. To me 8 to 13 miles offshore is a much better alternative to a string of obtrusive turbines along the Downs although I do remember some initial objections from clearly very athletic Shoreham Beach residents concerned that it could interfere with their swimming!

With the advance in technology Rampion now want to quadruple the electricity generated by doubling the number of turbines with larger state of the art versions. From generating some 400 megawatts now the output will increase to 1.6 gigawatts which will be enough to power over 1 million homes. To put that into context offshore wind currently generates just over 11m gigs so this will be a very major contribution to our renewable effort and the only wind farm still on the south coast.

I acknowledge that some people have reservations, particularly residents further west of Sussex where the turbines will stretch and the new cable come ashore, but I think that most of my constituents who have seen the project through are supportive. Ultimately these developments will help with our energy security and cushion us against shocks in world fuel prices.

The visitor centre at the i360 in Brighton is a wealth of interactive experiences and well worth a visit. I have suggested to the Rampion team that they could link more real time information to their website so that people can see exactly how much clean energy is being generated at any one time and the difference it is making nationally. It has also spawned a new wave of tourism with visitors taking boat trips round the wind farm. And if one of their diggers gets stuck in the sand again and becomes Moby Dig 2 or Digger MacDigface then the national publicity should up the visitor economy even more.