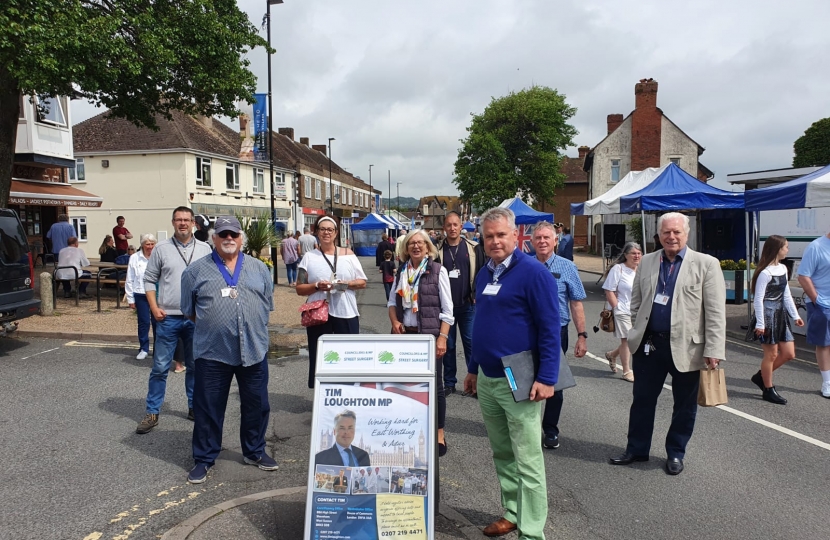 Oyez! Oyez! Oyez! rang out over Lancing village on Saturday as Worthing’s favourite bell waggler Bobby Smytherman, was deployed to deafen the good folk of Lancing to announce the restoration of the country market.  It was good to see such a strong turnout in the market’s new position south of the level crossing with a lot of interest around the Parish Council stall where councillors have just agreed to market additional beach huts which as usual attracted a lot of interest. We also managed to pick up a rather bigger caseload from constituents as well at our street surgery.

Together with the initiative of the Parish Council Chairman who has been producing a series of videos with local traders under the ‘Lancing is open for Business’ banner it is great to see things moving in the village at last, with several of the empty shops being taken.

This Friday I will be holding a scheduled constituency surgery at a new location in Sompting for which appointments can be booked through the constituency office and on Saturday it’s back to Shoreham of or our regular Farmer’s Market street surgery.

My neighbour Andrew Griffith previously mentioned the new proposals from the Boundary Commission which suggested a much bigger shake up for the West Sussex constituencies than had been expected. One of the most surprising parts of the plan is to split Sompting off from the rest of Adur and put it in a new Worthing constituency which otherwise only consists of other Worthing Borough wards. The rest of Adur is otherwise detached from Worthing and extended inland to incorporate several Horsham District Council wards which in the case of Downland villages and towns like Steyning and Henfield have tended to look more to the coast to the south than Horsham to the north-west.

The Boundary Commission review has a long way to go yet and there is currently an 8-week initial consultation underway until the beginning of August before revised plans are published next year and then have to be finalised in 2023. Anybody can respond to the consultation and I would urge constituents to go online, do your own research and give your views. I know already a lot of Sompting residents are keen to have their say on the prospect of being ripped out of Adur but then I am biased of course. You can find the details here: www.bcereviews.org.uk