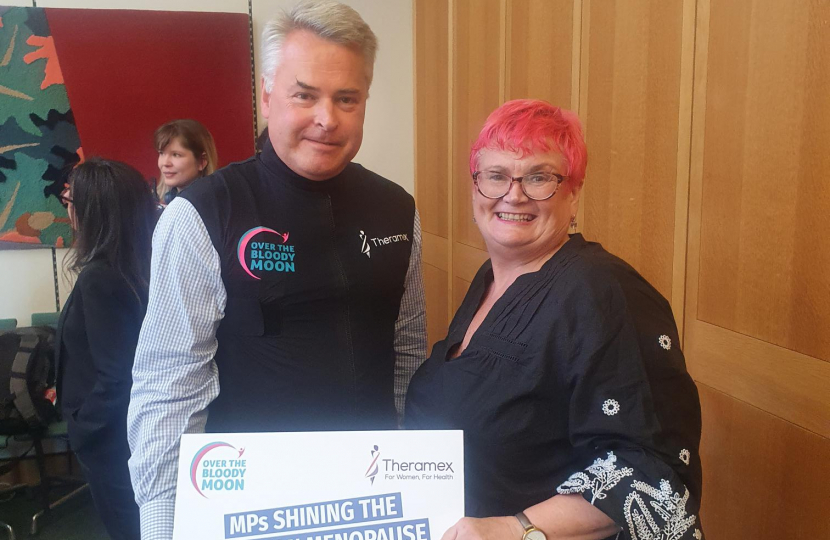 Politicians are used to being made to feel the heat under scrutiny by tenacious interviewers but not usually literally and when it is electrically induced by a Labour MP. Let me explain. Last week a few brave male volunteers, including me, took up the challenge from doughty campaigner and Swansea Labour MP Carolyn Harris to feel what it was like to experience menopausal hot flushes. All in a day’s work at Westminster.

Carolyn has a fantastic reputation for tackling tricky social issues in Parliament and does so on a cross-party basis which shows the Commons at its best. I have worked with her on campaigns to fund funerals for children, clamp down on addictive gambling and was a sponsor of her Private Member’s Bill to support women going through the menopause and make HRT products more widely available and affordable. As a result, the Government has adopted many of Carolyn’s asks and she is now chairing the menopause Taskforce. Characteristically Carolyn wants the Government to go further and faster and so she invited a number of male colleagues to don a ‘Menovest’ which replicates the effects of hot flushes to reinforce the challenges that so many women have to go through, and often whilst trying to hold down a job.

The vest has been promoted by the organisation ‘Over the Bloody Moon’ which works with businesses to raise awareness and make them more menopause friendly and thereby get the most out of their older female employees. Wearing the Menovest for any length of time certainly focusses the attention on the issue as fellow guinea pigs Iain Duncan-Smith, Shadow Health Secretary Wes Streeting and I found.

A theme of last Friday was school safety when County Councillor Kevin Boram and I had a briefing with West Sussex Highways cabinet member Joy Dennis about proposals for improving cycling safety around Middle Road in Shoreham and adding crossings to the Upper Shoreham Road.  We will publish more details soon.

Following a meeting Kevin and I had with Swiss Gardens School we will also be distributing a survey soon to see how we can address the congestion around the school at drop-off and pick-up times following some accidents. In the afternoon Southwick County Councillor Angus Dunn and I visited the excellent Eastbrook School to meet the new head and receive a petition calling for a crossing outside the school which seems eminently sensible and has our full support. So again, watch this space.

This Saturday we will have or usual street surgery at the Shoreham farmer’s market from 10am then it’s off to Lancing to celebrate 100 glorious years of Gardner and Scardifield in the village.