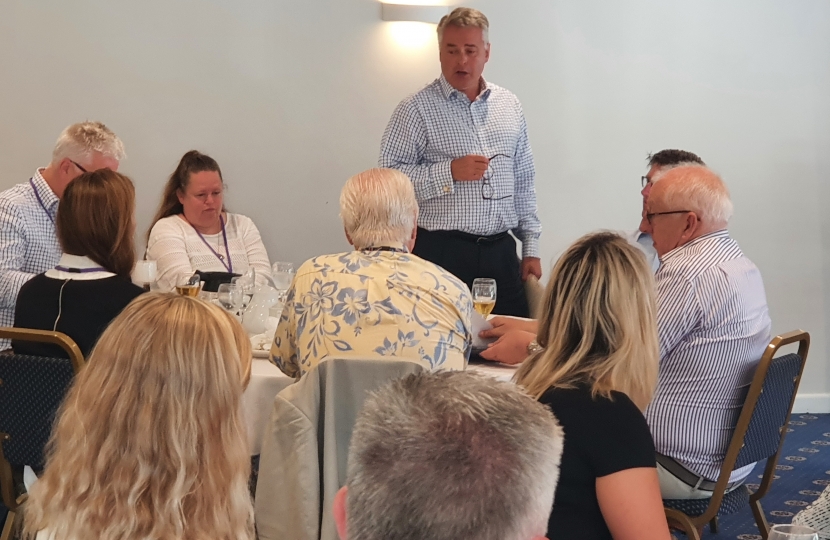 Parliament rose for the summer recess last Thursday with me still trying to catch up on a few hundred emails which have been relentless over recent weeks, particularly with constituents trying to make sense of the travel rules as we come out of lockdown. When I explained this on my last weekly video before the summer break, predictably one of the comments on my Facebook page complained about MP’s ‘long holidays.’

The first engagement of my ‘holiday’ on Friday was a 7.30am start at the Windsor House Hotel in Worthing speaking at the Adur & Worthing Chamber of Commerce breakfast, followed by visits to a number of local businesses and zoom calls. On Saturday I did my 20,000 ‘holiday’ steps delivering leaflets; Monday I spent sunning myself with the County Council cabinet and MP colleagues and on Tuesday it was off to the Costa del Dover for a day with Border Force and visits to refugee reception centres at the Napier Barracks and Tug Haven. The rest of the week has been spent in similar ‘holiday’ vein, and in particular I have been spending a lot of time working on how we can minimise the disruption on the A27 after the announcement out of the blue that work on the new roundabout with accompanying lane closures could start from August. Again, the New Monks Farm developers have kept everyone in the dark!

I am not complaining, but the point I am making (again) is that just because Parliament is not sitting physically, MPs can be busier than ever catching up on constituency duties we cannot do when at Westminster during the week and of course our 90,000 constituents don’t all depart on holiday at the same time or turn off their emails, least of all this year.

It was good to hear at the Chamber breakfast about a number of businesses bouncing back well with a common theme being difficulties with recruiting staff especially in the hospitality and logistics sectors. Understandably, there were a lot of complaints about the impact of the track and trace system and the number of workers who are getting pinged and having to isolate without any signs of having Covid themselves and having been double jabbed.  Last week a number of local councillors were pinged in the middle of a zoom call with me!

The Government can’t really win as last year everyone was complaining that there was not enough testing, let alone pinging, and the system is effectively now doing what it was set up to do. Clearly though the sensitivity is too high and surely if you test negative after being pinged then the risk is low and surely you should be able to return to work. I am pleased that the Government has now announced a list of exemptions before our essential workforce gets decimated.

This was the Chamber’s first breakfast physically since March 6th 2020 when their speaker was … me! If only we had known then what the ensuing 16 months had in store!