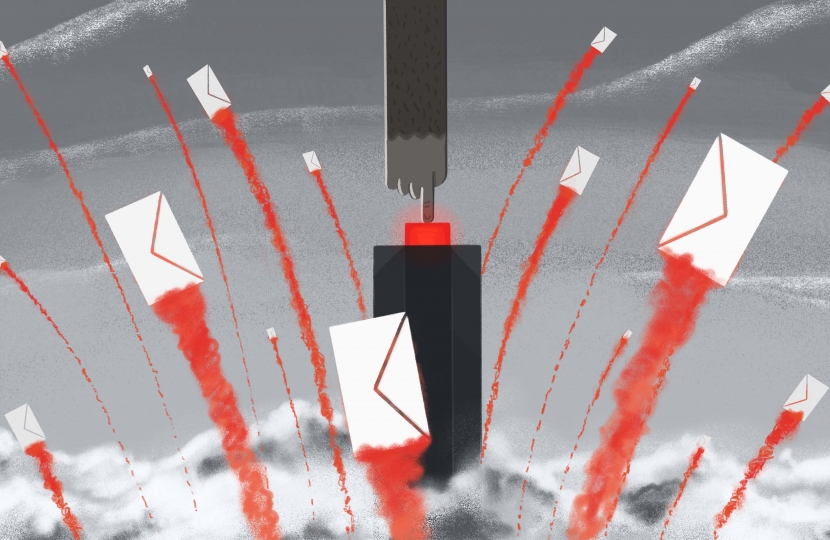 There was a very good example of why by and large I am not a fan of mass emailing of circulars promoted by pressure groups and forwarded by constituents. Several residents sent me an email this week to do with the issue of airline refunds on account of cancelled flights due to Coronavirus.

They all contained the lines: ‘I was meant to fly to [Insert Place Name Here] in [Insert Month Here], however, due to changes in Foreign and Commonwealth Office advice, my flight was cancelled.

There followed at least a further 4 uncompleted ‘insert details’ boxes ending up with a yours sincerely from ‘insert name.’ To cap it all no address was given in all cases. Most got my ‘insert name of MP’ right though. I have yet to hear back from the ‘Dear (insert name of constituent)’ emails I sent in reply requesting further details!

Now I am sympathetic with this cause and have taken up cases individually with the Department for Transport, but most MPs are not going to be very impressed with receiving mass emails  from constituents who are so exercised by the  issue that they have clearly not taken the trouble to read them properly first, let alone fill in a few relevant details.

Earlier in the month I also received a flood of emails on the subject of the Immigration Bill and an appeal to support an amendment to continue the excellent family reunification scheme for child asylum seekers after the Brexit transition period. Further down the email it detailed the amendment being sponsored by one Tim Loughton MP and Yvette Cooper MP, a Labour colleague. Clearly this is an amendment which I support and indeed voted for because it is MY amendment. It is again unfortunate that people rush to press the ‘forward’ key before properly scrutinising what they are urging their MP to do especially in this case when I do not need any persuading.

Now I always encourage constituents to engage with me as their MP and typically receive up to 300 emails every working day. But I also take the view that if someone is really passionate about an issue they will want to write with their own reasons and experiences rather than just recycle someone else’s pre-prepared words. More importantly it is much more effective ammunition for an MP to be able to get up in a debate in the Commons and say I have a letter from Mrs X of Shoreham describing how this legislation will impact her in this way or Mr Z from Worthing is concerned that this new clause will be disastrous for his business because… Getting up and referring to a hundred emails describing the exact same problem from Mr ‘insert name here’ and Mrs ‘insert name here’ just does not have the same impact I am afraid.

A final big thanks to Focus of Shoreham who have been supplying up to 60 delicious ready meals every weekday for the last 3 months or so whilst their workers have been working remotely. Day in day out their chef has kept his kitchen going and handed over the meals to Cllr Andy McGregor who then distributes them to staff at Worthing Hospital each evening with a team of volunteers. It has been a great example of the community rallying round during the Coronavirus crisis and I was delighted to award Focus with my first Coronavirus Community Champion award.