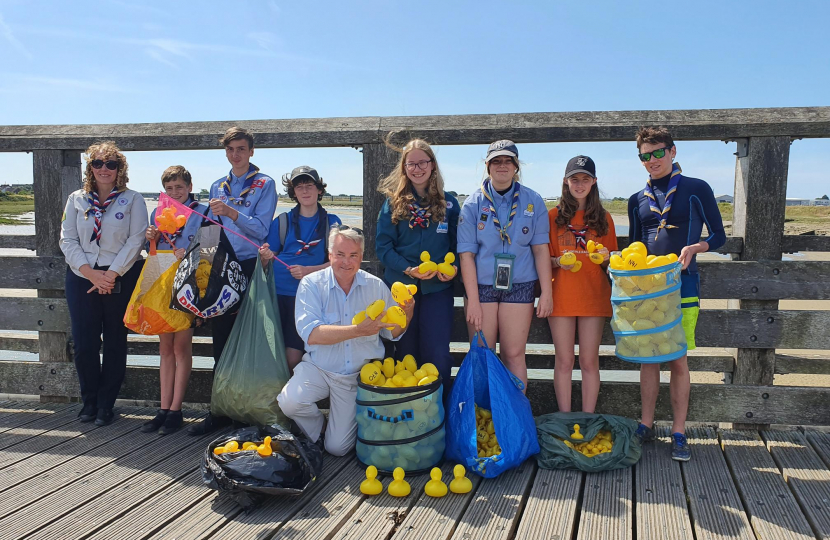 There may be a big race going on at Westminster but in Shoreham on Saturday all eyes were on the Scout Jamborettes Duck Race starting at the Old Toll Bridge. I was asked to start the race as more than 600 rubber ducks were unceremoniously tossed over the bridge into the murky waters below. Alas the currents were not being kind and there followed a rather comical scramble by scouts in kayaks and on paddle boards guiding (in honesty mostly hurling) ducks stranded on the mud flats back into the flowing water.

The leading group soon opened up and the winners reached the flyover bridge in no time at all and every single one was very efficiently rescued, and the prizes awarded. This is part of the fundraising to send 9 Adur Scouts to the International Scout Jamboree in South Korea next year. They still have a long way to go so have a look at their Just Giving page. As my father represented Shoreham as a member of the 6th Shoreham Troop at the International Jamboree in Austria way back in 1951 and I still have the broad brimmed Baden Powell hat to prove it, I can heartily recommend this good cause.

I spent Friday afternoon at the A&E department of our excellent Worthing Hospital at the invitation of lead consultant Dr Matt Staniforth. I recently spoke on a panel at a conference in Brighton organised by the Royal College of Emergency Medicine and heard about the challenges that many of them are facing in increasingly busy hospitals as patients struggle to get appointments with GPs.

As you would expect at our excellent Worthing Hospital  I found a very calm and efficient department despite the inevitable increase in patients affected by the current heatwave. The dedicated staff are increasingly under pressure from non-availability of beds being occupied by people medically fit for discharge but with insufficient ongoing care. The other big problem is the number of people with mental health problems, often accompanied by police, for whom an A&E department is not the most appropriate place for help. It was useful to see this at first hand and be able to report back to new Health Secretary Steve Barclay when I returned to Westminster on Monday.