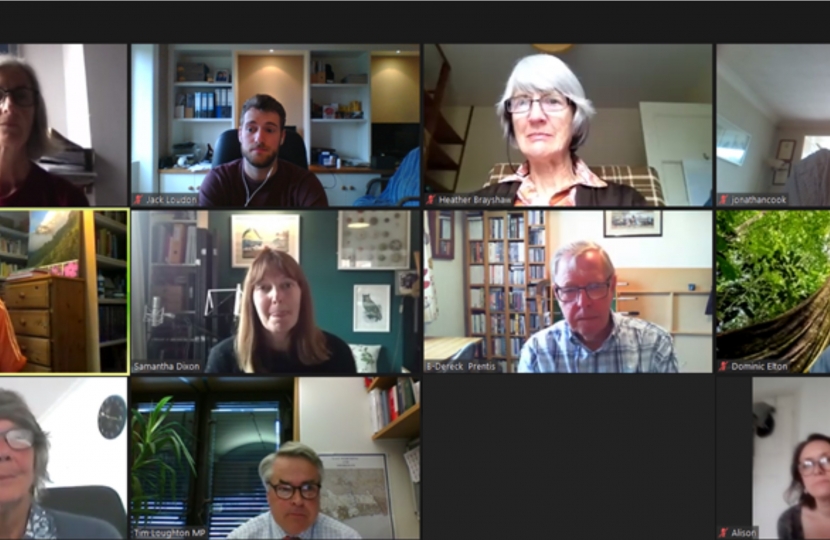 Another Parliamentary first this week as I held my first virtual mass lobby in response to the event organised by ‘The Time is Now for a Green and Fair Recovery,’ and marking a year on from the Government’s historic commitment to net zero carbon by 2050. I am pleased to report that everyone was much more socially distanced than the mass lobby in Westminster last year which snaked across Lambeth Bridge to the South bank and it was much easier to hear everyone.

I have already had discussions with Chancellor Rishi Sunak about making sure the recovery from the Coronavirus recovery is based on green principles and there were many good ideas in evidence at the lobby from carbon capture through kelp farms which Worthing is working hard on to green bods to invest in environmentally friendly infrastructure and business grants. Who knows, these virtual meetings may catch on although I think trying to restart my street surgeries by sending a hologram in my place might be slightly problematic! Speaking about street surgeries – I will be at the Shoreham Farmers’ Market (opposite Tarmount Lane Car Park) on the 11th July.

This week I have been very involved with the Report Stage of the Immigration and Social security Co-Ordination Bill which ends EU free movement of people amongst other things. Along with a cross-party group of MPs I have again been trying to commit the Government to a more explicit statement on the arrangements for family reunion by vulnerable children which we need to replace the existing so-called Dublin 3 scheme. We have a proud record here and have already taken 19768 vulnerable refugees from Syria alone since the civil war. It is important that we continue to have a safe and legal passage for some of the most vulnerable children fleeing war zones and abuse and I am pleased that the Government see this as important too, even if they did not go quite as arras I would have liked in accepting my amendment.

We also passed the Business and Planning Bill in Parliament this week which amongst other things allows pubs to reopen and utilise outside space without having to wait months for a licence through a lengthy application process. Needless to say, this was a very popular piece of legislation and went through without a vote. That doesn’t mean however that everyone can go completely berserk whet ne pubs reopen on Saturday.

Pavements have been widened in some of our shopping streets in Shoreham an Lancing to cope with queues and customers for newly reopened shops and bars but it is important they are not overrun as Shoreham Beach was last week, leading to many complaints and huge pressure on Adur’s services to clean up rubbish and try to prevent gridlock. The lesson from Leicester should remind us that Coronavirus has not gone away and unless we continue to exercise common sense and go about our lives safely the pub reopening could be short-lived and we will be waiting even longer to get back in the gyms and football stadiums.