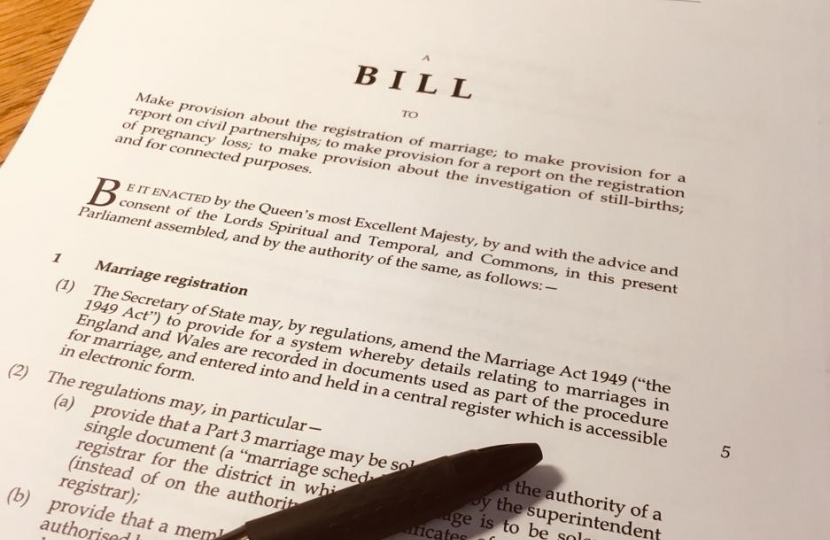 As I write we have yet to vote on the Prime Minister’s Brexit deal, so more of that next week and on my website and Facebook page in the meantime. In an otherwise tumultuous Parliamentary week on Thursday I will be leading a debate in the Commons on children’s social care and my concerns about the impact of funding on safeguarding children, whilst on Friday my Private Member’s Bill starts its passage in the Lords. I have had a number of enquiries about the timing of this especially from opposite sex couples wanting to enter into a civil partnership as my Bill will enact.

Providing the Bill is passed in the Lords where it has a lot of support, and providing it is not sabotaged by something like a general election coming along, the Bill is due to come back to the Commons for a final signing off of an amendment on March 8th. Within weeks it should receive Royal Assent and then the Government would be obliged to make civil partnerships available within six months, which effectively means before the end of 2019. There are of course other parts of my Bill and a fuller description can be found on my website too.

On a more local level I can report that the Secretary of State for Local Government is still considering whether the plans for New Monks Farm should be ‘called in’ for further scrutiny but I have found out that he received 225 representations from people objecting to the application against just 14 in favour. So well done to all those constituents who put pen to paper in particular to oppose IKEA being plonked next to the Airport.

On an even more local level I am delighted to report that it is at last safe to walk under the bridge at the bottom of Southdown Road in Shoreham when it has rained without wearing waders. After a lot of lobbying of Network Rai by me and Shoreham Councillor Kevin Boram Rail including getting planning permission to gain access, the drain blockage causing the incessant lake every time it rained has been sorted. It took several attempts by Network Rail working jointly with West Sussex highways staff to locate the real origin of the problem apparently someway back up the system, and it was eventually cleared. Better late than never and hopefully it will now be properly maintained so the problem does not reoccur. Thank you to everyone for their patience.