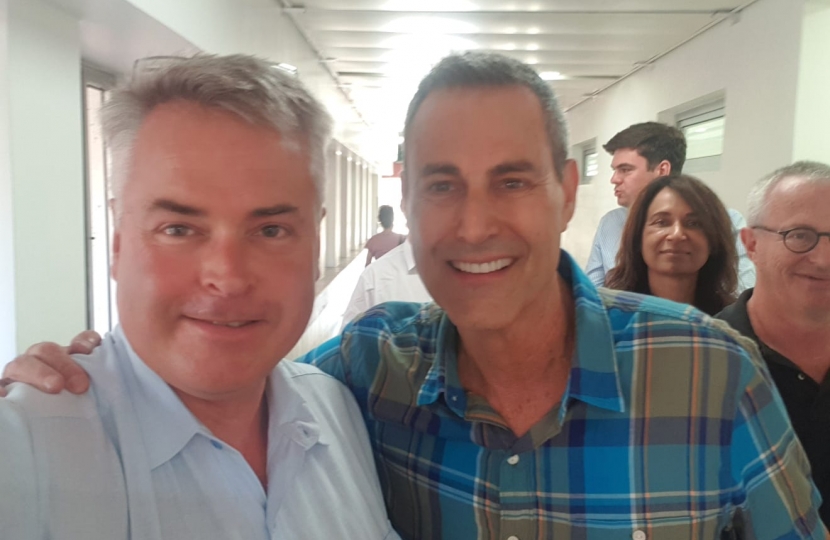 ‘I have just been on a trip to Israel and all I came back with was three bent spoons’ is not a regular T shirt slogan, but it happened to me last week. I was with a delegation of Conservative parliamentarians visiting Israel and the Palestinian Territories last week when we bumped into Uri Geller as you do.

We were visiting the cutting-edge Edith Wolfson Medical Centre in Tel Aviv and the incredible ‘Save a Children’s Heart’ facility which fixes children with life threatening congenital heart problems from around the world and nurses them back to full health. It is an incredible charity attracting doctors and nurses and volunteers from around the world and we met children from Ethiopia to Uzbekistan with their parents whose lives had been changed. Then out of nowhere this stranger turns up, introducing himself as Uri Geller, telling us his life story and bending every piece of cutlery in sight. It turned out that he was a long-term supporter of the hospital.

Later on that evening he invited us to visit the site of what is to become his spoon museum, due to open in Old Jaffa next year where he already has the largest spoon in the world just certified by the Guinness Book of Records. Later on, having hardly drawn breath for several hours he revealed how his next-door neighbour in the UK is Theresa May and he showed us an email he had just sent his friend Boris Johnson with his predictions and advice about Brexit! I am sworn to secrecy!

In the scheduled part of the visit we met a number of dynamic high-tech businesses taking advantage of some of the highest spend on Research and Development anywhere in the world and had briefings from politicians and political pundits explaining the highly complicated state of Israeli politics which makes Brexit look like a tea party. Everywhere we went though they were keen to have Brexit explained to them and expressed concerns about anti-Semitism in the UK. You only needed t spend a little time in the impressive but harrowing Yad Vashem Holocaust Memorial Museum in Jerusalem to appreciate why.

We also spent a day in the Palestinian Territories and met the head of the PLO negotiating team who was full of gloom and doom and managed to issue a press release about our meeting which mentioned all sorts of things we had not even discussed. Later on we toured the incredible new desert city of Rawabi being built by Palestinian entrepreneurs who had a much more optimistic take on the future.

Last year I visited East Jerusalem and the Palestinian Territories with the Medical Aid for Palestinians charity and subsequently held a ‘report back’ public meeting for constituents organised through Shoreham Churches Together. I said then I would be visiting again and get the Israeli perspective on the Middle East conflict and will therefore be holding a follow up meeting in the early Autumn, details to be announced soon.

From the sublime to the ridiculous we have now shortlisted entries to my cutest pet competition after being deluged with entries and you have 2 weeks to vote for your favourite on my Facebook page.

Thank you to all those who have been sending me their nominations for my Coronavirus Community Champion Award. I have received some very impressive entries so far for individuals, businesses, organisations and even whole families.