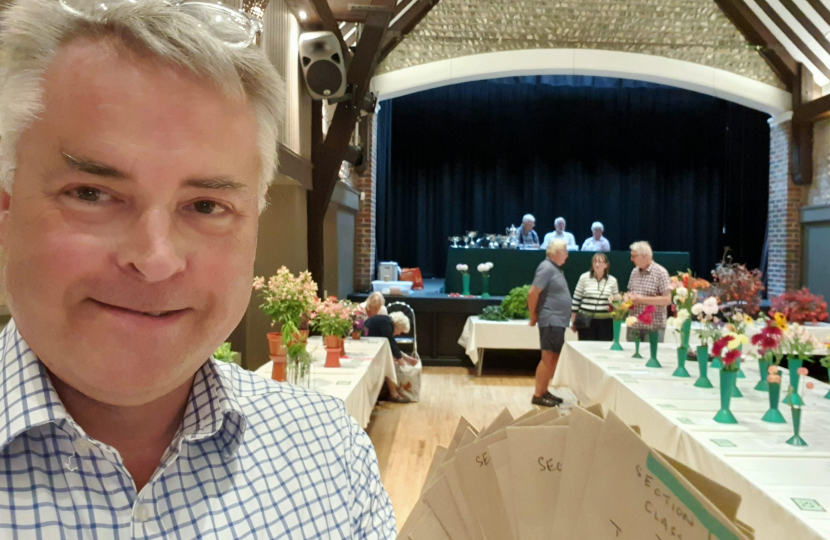 Last week I received a large number of brown envelopes stuffed with money. But before you think the worst, it was all legitimate. They were my record winnings amounting to £20.10 in total from the 102nd Southwick & Fishersgate Horticultural Society Summer Show.

It was the first time that the show has been in person since before the pandemic and the same with the Shoreham Show which takes place on September 3rd and where entries have been on a virtual basis since 2019. It is much easier to disguise the bruises and the bumps when you are taking a photo of your courgettes from a certain angle but there is nowhere to go when an expert judge in person is feeling your plums and looking under the culinary shallots!

There were some incredible flower entries as ever despite the drought which has made it hard to grow anything impressive in the garden, and where many vegetables are now passed their best. I was particularly delighted to get top prize for my ‘Top Tray’ and a second for my black mulberry and sloe gin jam.

Even more remarkable was the range and number of beautiful blooms on display at the ‘Sense of Place’ inaugural flower festival in the Lancing College Chapel. It was an impressive setting worthy of the magnificent creativity of the 120 flower groups from across Sussex who had come together to produce such breath-taking displays. There were musical instruments with trailing trumpet lilies in the chancel, a forest of hanging white roses around the apse and heady scents everywhere down through the nave. Well done to everyone involved.

On a more sombre note this week we commemorated the 7th anniversary of the tragic death of eleven men at the Shoreham Air Show disaster on that fateful summer’s afternoon. The local community stood shoulder to shoulder with the families and friends of the victims at the time and the memory and that solidarity remains undiminished over time.