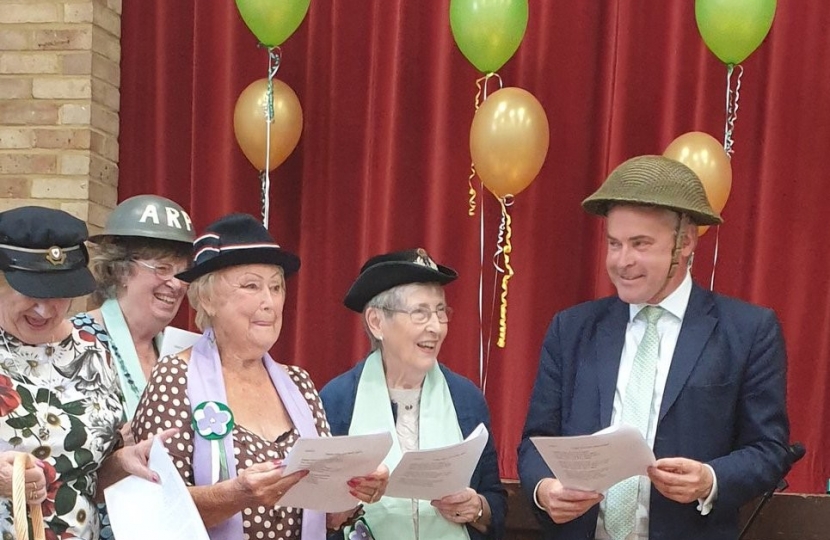 If you think that the WI is just all ‘jam and Jerusalem’ then think again. I spent a very jolly but very informative lunch and afternoon with Lancing branch of the WI to celebrate their centenary at Lancing Parish Hall last week. The first branch of the WI in England was founded in Singleton in West Sussex in 1915 and Lancing was one of the earliest branches formed 4 years later. One of the founding members was Mrs Beatrice (later Lady) Ricardo, the wife of Ricardo Engineering founder Sir Harry Ricardo and meetings were held at their house Penstone Place in Lancing.

What many people don’t realise is that the WI was actually founded in Ontario, Canada back in 1897 and only later spread to the UK and then other mostly commonwealth countries. Today the WI remains the largest voluntary women’s organisation in the country with 220,000 members spread over 6300 branches. Lancing members performed a medley of readings, quirky costumes, songs and demonstrations taking us through the ten decades of the WI’s history.

What most struck me was just how ahead of their time they were with the many mass campaigns they took up which later became national issues and led to changes in the law. For example, back in the 1930’s the championed a campaign for more women police officers; in the 1960’s they led calls to ban smoking in public; in the 1970’s they lobbied for breast screening clinics and in the 1980’s for better education on HIV AIDS. In recent years they have been waging war on plastic pollution and climate change as part of their ‘Show the Love’ campaign. It seems the rest of the world has only just been catching up with the WI on so many of these issues and they serve up a very good lunch!

The heavens opened but the sun came out just in time for the annual Canadian Memorial Day service at the Canada memorial stone at the bottom of Grand Avenue. This year we were of course also commemorating the 75th anniversary of D Day which involved more than 14,000 Canadian troops landing on Juno Beach on the first day. Many of them were of course stationed in Worthing and around Sussex.

Amongst them was one Lt James Montgomery Doohan of the 3rd Division Field Artillery, born in Vancouver but better known as ‘Scotty’ of Star Trek fame. He is said to have been billeted in the Beach Hotel Worthing ahead of the Battle of Normandy.

The rain was no deterrent as the turnout at this special Worthing event seems to get bigger each year. Yet again organiser Pam Vowles, who took over the running of the Canadian Roots charity from her late husband, of which I am privileged to be a patron, did an excellent job in keeping the flame of Anglo-Canadian friendship alive.

Thank you to all those who voted in my ‘Cutest Pets’ competition to celebrate the new Animal Cruelty Offences Bill. The winning dog was Labradoodle Eddie narrowly beating SharPei Hogarth; black and white cat Jack who beat black and white cat Miss Martha; and the denim clad rabbit Biscuit was the runaway winner of the other pets category. Congratulations to all the winning owners and a bottle of champagne is on its way.

A shorter weekly video than usual as this week Parliament is in recess - discussing Storm Dennis, the very successful inaugural ‘Make Britain Breakfast Again’ and the latest developments on coronavirus. Apologies about the video quality!