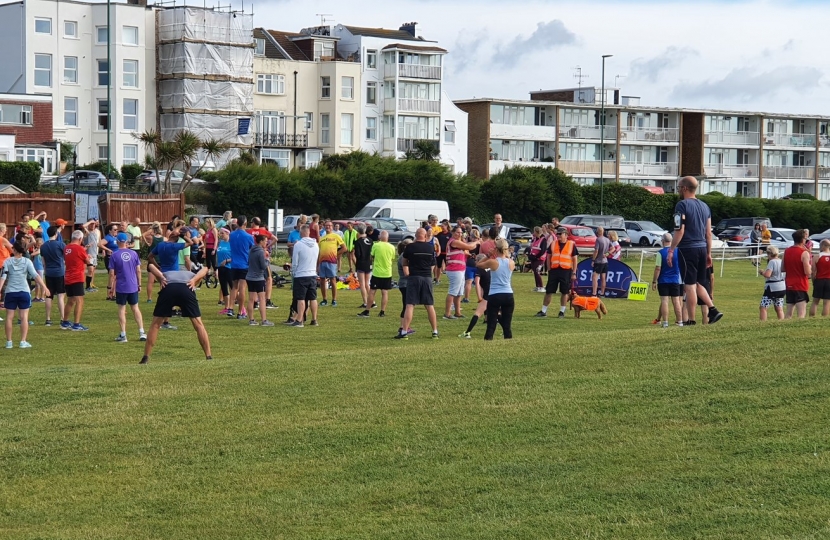 It was good to see the strong turnout at the Lancing Beach Green Park Run as another regular outdoor pursuit gradually returns to normal. No doubt spurred on by the Olympics around 100 enthusiastic runners of all shapes, sizes and speeds for the 2 Saturday morning events so far. I limited myself to being a pretty useless marshal trying to separate the cyclists from the runners on the 5k route on the promenade proper.

The head of the pack was so fast on the return run that I was caught out busy chatting before noticing that a slightly juddery cyclists was about to career into him on the turn next to the Perch. #Fail #YouHadOneJob. Fortunately, disaster was just about averted. Perhaps next time it would be safer on everyone else at least if I joined the runners!

I don’t know about you but I am certainly getting withdrawal symptoms since the Olympics ended although my sleep patterns are returning to normal without feeling the urge to turn on the TV in the middle of the night to see if we had won another boxing medal or clinched gold in the keirin or madison cycling not that I began to understand how they worked. Our athletes did us proud again with a medal total to equal London 2012 though a few silvers were a whisker or 2 short of being gold.

What I found really inspiring this time was the stories behind some of the leading competitors who make so many sacrifices for their few minutes of glory on the Olympic podium. The boxers who had to work night shifts as taxi drivers to make ends meet in between training sessions; the athletes who just weeks ago were studying for their A levels and of course the 13-year-old Sky who took bronze in skateboarding and made us all feel very old, including the poor interviewers who tried to keep up with her every sentence which seemed to include the phrase ‘super sick.’

And at a time when daily we read reports in the press about students at Oxford banning portraits of the Queen as ‘colonialist’ or an Aberdeen student being banned from the Union for using the phrase ‘Rule Britannia’ it was great to hear so many winners say how proud and grateful they were for their country as they did a lap of honour draped in the Union flag. They surely are the real role models we want to motivate and inspire our young people, increasingly petrified of falling foul of the politically correct brigade.

There is special Farmer’s Market this Saturday as Shoreham Traders are laying on some street entertainment and everyone will be wearing their smartest hats. I will be there as usual for our street surgery with local councillors from 10. See you there