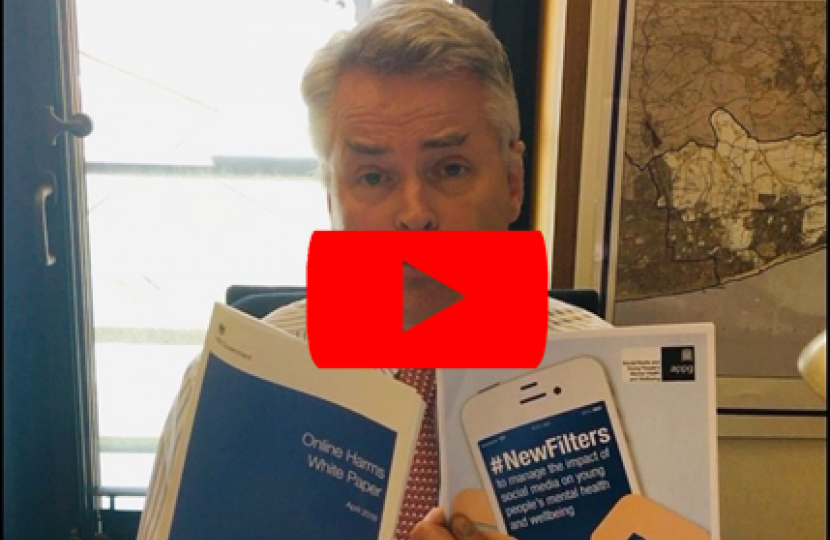 If you waded beyond all the Brexit coverage last week there were 2 interesting and very welcome announcements from the Government. Firstly, the Department for Digital, Culture Media and Sport published its long-awaited ‘Online Harms White paper’ putting forward proposals to deal with the prevalence of illegal and harmful content online.

This is an area we have dealt with over the last few years on the Home Affairs Select Committee dragging before us increasingly woeful representatives of the social media giants to be challenged on their hosting of radicalisation and terrorist promoting websites as well as a casual attitude to taking down deeply abusive hate speech. Two recent examples have rightly heightened the public’s concern in particular -  the livestreaming of the terrorist massacre at New Zealand’s mosques and the poignant suicide of 14-year-old Molly Russell after accessing self-harm websites.

As the former Children’s Minister who chaired the UK Council for Child Internet Safety (UKCCIS) I am particularly concerned about the impact that irresponsible use of the internet is having on the mental health of impressionable children and Government needs to act proactively and decisively. Given their huge investment into complicated algorithm technology which constantly seek to persuade me to buy products on the internet which I never knew I couldn’t live without, the social media giants could if they chose, invest in systems which would prevent harmful content being hosted on their platforms in the first place and better still flag up warnings when a user is consistently accessing websites entitled ‘kill myself’ for example.

The White Paper suggests hefty penalties for social media firms failing to exercise a duty of care to its users and an online independent regulator for online safety. This is pioneering work and it is important that we get it right which is why I would urge all constituents who are concerned about making social media a safer place for all of us to use to engage. You can find the full document at https://www.gov.uk/government/consultations/online-harms-white-paper

Last Tuesday the Government also produced its response to the consultation on the reform of family law and specifically the legal requirements for divorce. There have been high profile cases recently of spouses trapped in an abusive marriage because their partner will not countenance a divorce, just exacerbating an already deeply acrimonious relationship. Having just piloted my Private Member’s Bill through Parliament to extend civil partnerships to more couples I am an unashamed supporter of greater family stability through recognised and formalised unions where appropriate, and the Government has done much to provide reconciliation and support services too. But when sadly a marriage or civil partnership has irretrievably broken down, continuing in it can be damaging for the couple and for any children they have.

A new system of ‘no-fault divorce’ is long overdue and the Government has committed to legislating early in the new session of parliament which will hopefully be upon us shortly despite Brexit. Important announcements like these which are directly relevant to millions of people’s lives show that there is life beyond Brexit even if the media tends to give a different impression.

A shorter weekly video than usual as this week Parliament is in recess - discussing Storm Dennis, the very successful inaugural ‘Make Britain Breakfast Again’ and the latest developments on coronavirus. Apologies about the video quality!