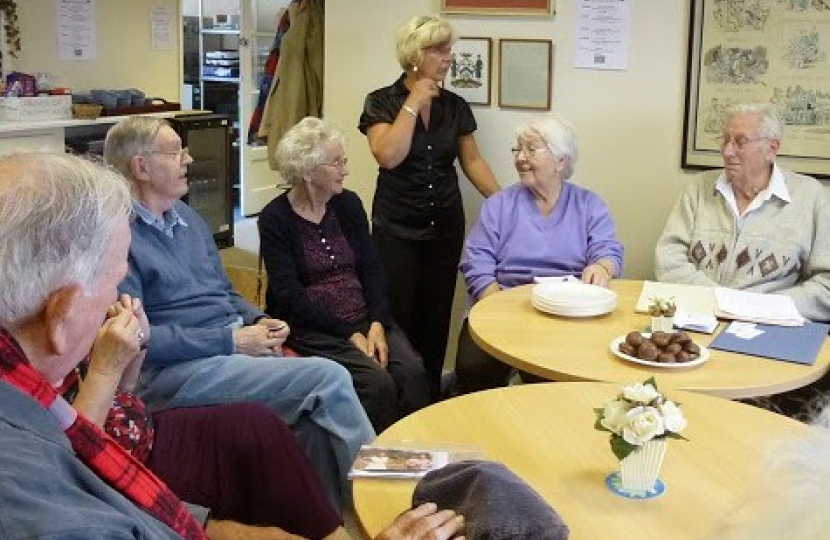 Thank you to all the volunteers and supporters who came along for an update on the situation at Chesham House on Saturday. It was standing room only and we were joined by Fiona Longhurst and Michael Gardner from RVS as well as local councillors Steve Neocleous, Mike Mendoza, Mandy Buxton and Ann Bridges.

We called the meeting following further discussions with RVS to keep everyone abreast with how things were progressing and to discuss ideas and ask for suggestions from supporters about fundraising and future use of the centre. As I stressed at the meeting, we have been negotiating in good faith with RVS and I am grateful that they put the proposed sale on hold and withdrew redundancy notices for staff as a result of the strength of feeling to keep the centre open. I still believe that they share our ambition to reopen Chesham House as long as we can show that it can be run without a subsidy that they can no longer sustain. I realise however that given recent events some people remain suspicious abut the intentions of RVS to dispose of the site and Fiona Longhurst was at pains to dispel those concerns.

The main bone of contention has been the extent of the ‘subsidy’ which RVS say they can no longer afford due to the devastating impact of COVID on them and many other similar charities. Some supporters of Chesham House who were at the meeting and who have been very involved with organising activities and managing budgets there in the past maintain that before it was closed during the lockdown the centre was actually generating a surplus. Much of the confusion appears to be around the way RVS accounted for central costs and whether all of the income generated by Chesham House was actually credited to them locally.

Hence, we have been at pains to request a full breakdown of the finances from RVS and how they calculate the projected loss. Recently we were at last provided with more detailed figures where the bottom line is a predicted loss of just under £60,000 over the next 2 years, on the basis that Chesham House could be reopened for a 2-year window to be able to prove itself as revenue generating and to confirm that the demand is there.

However, the figures still lack detail with many general headings covering a multitude of different costs. In addition, many people on Saturday were able to provide greater detail about how much income various activities and rentals actually brought in. As a result of this we will be going back to RVS to query some of the projected figures being used and we believe that this will reduce the estimated deficit substantially.

In addition, we believe that a considerable contribution to income could be restored if the 2 flats on the upper floor of the building are refurbished and rented out again. Due to a lot of hard work by Steve Neocleous and the generosity of local businesses most of the equipment needed has been secured for free as well as volunteer workers. As a result, we believe that we can reduce costs by a further £10,000 plus and RVS have agreed that this work can be done, and the flats rented out as soon as possible. Overall, therefore the deficit we need to plug is considerably lower than originally suggested.

Looking forward we now urgently need to be able to show that we are able to raise funds to set against the possible shortfall in running costs; attract new outside groups to provide rental income and increase activities at the centre that improve footfall and usage. I was pleased to hear offers to help with fundraising at the meeting with plans to resurrect the previous fundraising committee There are also suggestions that Chesham House should start a subscription service so regular users paid a patron’s fee to help raise regular income. We also plan to launch a crowdfunding page soon to connect with the wider Adur community.

Specifically, therefore we need help with the following and would welcome your offers. You can reply to me by email on loughtont@parliament.uk; respond on this Facebook page or write to me at the House of Commons at Tim Loughton MP, House of Commons, SW1A 0AA. Conscious that many people do not do email or social media we will also be delivering leaflets around Lancing shortly too.

* Can you organise a fundraising event in aid of Chesham House? We can help you organising this.

* Would you like to run an activity at Chesham House when it reopens?

* Do you know of a local organisation which would like to rent space at Chesham House on a regular basis? There is an annex office area which could be rented out to a permanent tenant too.

* Can you volunteer to help run activities and help with the upkeep of Chesham House? In particular can you bake cakes for the café?

* Do you know of any generous people or businesses locally who would donate to the rescue of Chesham House and become benefactors?

* Do you have any other bright ideas that we have not thought of yet?

If you can answer yes to any of the questions please do get in touch as soon as possible. We look forward to hearing from you.