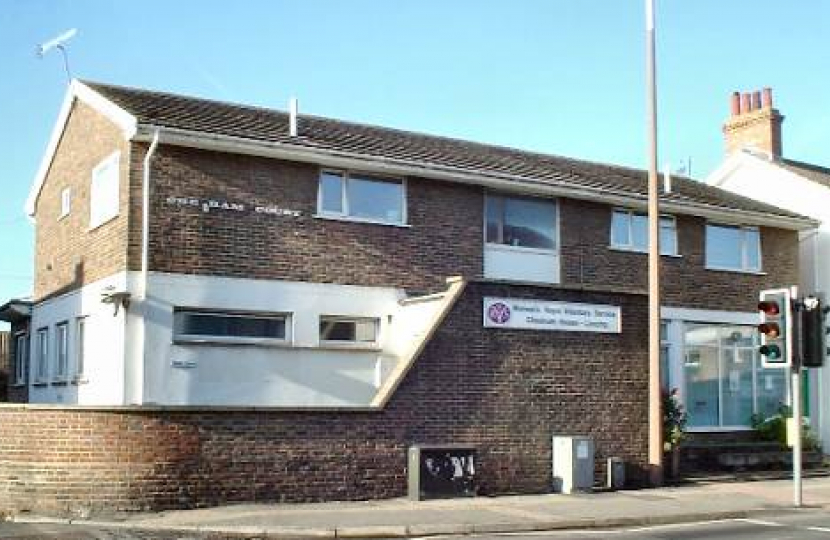 Further to the meeting with the senior management of the Royal Voluntary Service held on March 25th with me and local councillors Steve Neoclous, Carol Albury, Ann Bridges and Mike Mendoza, we have now received a proposal for the way ahead.

It is encouraging that the charity has agreed to look again at all possible options for the future of Chesham House and the services it runs for local people and that work on this will be completed by the end of June. It is disappointing however that they have not agreed to the 12 months ‘breathing space’ that we requested so that the centre could open again, at least in part, and all options looked at exhaustively together with local councillors and other partners. We are also still waiting on the details of the exact shortfall in budget that the RVS say requires them to pay a subsidy to keep the centre open.

The RVS will now be looking at maximising the value of the flats on top of the building to produce an income steam or possibly sell to raise capital, which is helpful. They have also arranged a meeting with volunteers and staff later this week as I had raised concerns about the poor communication with the many local supporters.

I hope that the RVS will publish the correspondence in full but I have not yet secured permission to do that, so I have published below our response to the Chief Executive of the RVS

Dear Catherine – thank you for your email and attachments. I am very grateful for the time that you and your colleagues took to meet me and councillors recently and I am grateful for the positive stance you have taken to finding a solution that will hopefully maintain Chesham House and its services. I am pleased to see that you are keen ‘to move at pace’ at resolving this and the helpful timetable you provide. However, I would like to pick up on a number of disappointing decisions which you appear already to have made and missing information which you agreed to provide at our meeting. Can I also just point to an error in your timetable as you refer to ‘purdah’ period as 14th May to 5th June when it fact it ends on May 5th which is local council election day.

You repeat your position that the RVS can no longer afford to subsidise the running of Chesham House, as acknowledged at our meeting. However, you were not able to quantify the exact level of the subsidy when taking into account levels of income from the café, central payments to RVS, local legacies etc. Subsequently you asked your finance director to provide a full breakdown on the finances for Chesham House as a matter of urgency. No such figures have been provided making it difficult to proceed if we do not know the exact nature of the shortfall.

Whilst I acknowledged that you want to research possible solutions as a matter of urgency in order to make an announcement before the end of June it is disappointing that you have not agreed to the ‘breathing space’ period that we suggested, if not 12 months than at the very least 6 months. You are undertaking a tremendous amount of work over what is now a little over 7 weeks which will involve a good deal of consultation and discussions if it is to be done properly. Guaranteeing a longer period would offer some stability for various options to be ‘road-tested’ in particular a reopening of the café. In the many communications that I and councillors are receiving from local residents it is clear that many are still feeling unsupported and are greatly troubled by the continuing uncertainty over the future of Chesham House.  One of your concerns is that you project that community cafes such as that at Chesham House will be much less utilised than before the pandemic and therefore less able to offset your subsidy. Given the very strong support shown by the community for Chesham House I would strongly dispute that prognosis, but you have no way of gauging that whilst the café remains closed.

You say that reopening the café would ‘divert a great deal of resource.’ Why? Former staff secured quotes for a deep clean of the premises ahead of reopening which are not excessive and there are plenty of volunteers who would help staff the café and provide cakes, myself and councillors included. It has also been suggested that Chesham House could provide a meeting point for Ukrainian refugees now arriving in Adur and there are again many people who have already come forward to offer help with such a project. I would therefore ask you to reconsider your refusal to open up Chesham House for limited use at least whilst your research is ongoing. This would also demonstrate a deal of good will to the community and volunteers.

I understand that you have proposed a meeting with staff and volunteers on site this week and I would request that I or councillors are represented at that meeting.