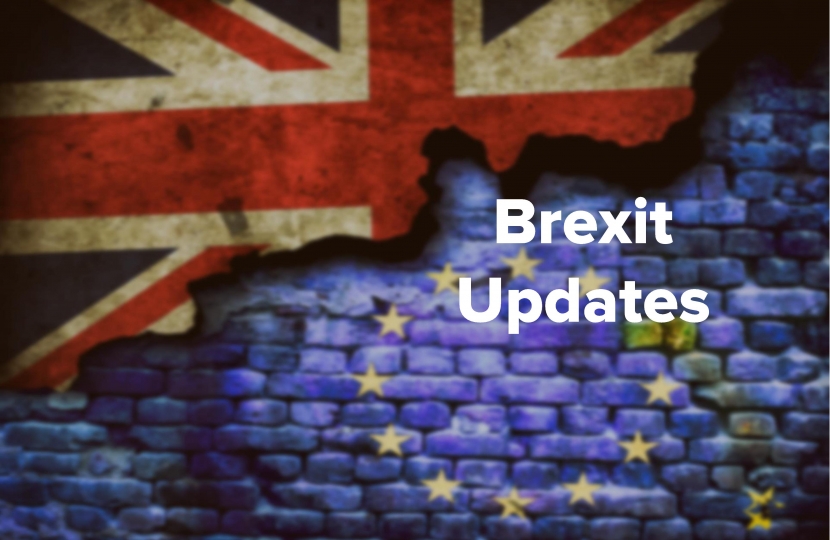 Against all the odds and certainly against expectations of the government and the markets the British people decided that, after 43 years as a member of the EU, it was no longer for us.

I hear that message and respect and agree with that decision, and the Government must too. In my constituency, the margin of the vote to Leave was higher than the national figure at around 55%-45%. With a turnout of 72% of the British public, which was the highest in a UK-wide election since 1992, 17,410,742 people voting Leave – the biggest vote in British history for anything – and with all the regions of the UK voting to ‘Leave’ outside London, Scotland and Northern Ireland, it was a solid endorsement.

Regardless of your position on the Leave/Remain question, this was certainly a victory for democracy and I hope that this level of engagement on important political issues can be maintained in the future.

Last week the Brexit Bill finished its stages in the House of Commons - with a 99 majority - and will now move to the House of Lords before becoming law and enabling us to leave the EU at the end of  this month with a deal. Getting Brexit done.

This week I talk about an upcoming seminar with WASPI women, a meeting with the British Youth Council, my eco-tip (do send in any suggestions!) and a new Brexit deal.

I asked Hilary Benn MP - architect of the Bill to extend our membership of the EU to January 31st or to an alternative date of the EU’s choosing - why he believes this Bill would possibly make the EU offer more generous terms for a Brexit deal - one that he could back.

Parliament Prorogued - what next?

We’ll have the Queen’s Speech on the 14th October.

My speech in Parliament on the Brexit debate on the 9th April.

Medicinal Cannabis, Social Media regulation, Brexit and much more in my weekly look ahead.

We were supposed to be coming out on the 29th of March last week. I just wish we’d been able to achieve that, because this has gone on for far too long.

My Brexit update from another historic week in Westminster.

In the spirit of Henry Ford’s “any colour as long as it is black”, on Monday night we could have ‘compromised’ and voted ‘Aye’ to any Brexit option – as long as it was remain.

My April 1st ‘Forward-look’ video, fresh from greeting constituents from the Shoreham Beach Residents’ Association up in Westminster. I talk about Brexit (and our new round of votes this week), Mayoral visits, the E.Y.E. Project and more.

Stay informed on Tim's thoughts on the Brexit process